Aussies next to face wrath of online poker sites crackdown?

The war on online poker sites is spreading across the globe as the Australian Federal Police (AFP) work in conjunction with the FBI (Federal Bureau of Investigation) to investigate unregulated and untaxed websites that bring in approximately AUS$1 billion – about $1.07 billion – every year. 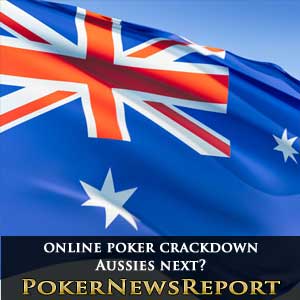 The war on online poker sites is spreading across the globe as the Australian Federal Police (AFP) work in conjunction with the FBI (Federal Bureau of Investigation) to investigate unregulated and untaxed websites that bring in approximately AUS$1 billion – about $1.07 billion – every year.

About 700,000 Aussie punters will be more than slightly concerned following the US Department of Justice (DoJ) decision to shut down numerous poker sites, including big-name players such as Full Tilt Poker, Absolute Poker and PokerStars, last month on ‘Black Friday’.

As Aussies have been using poker websites such as those named above for quite some time to enjoy their poker fix, the fear is they will also have accounts frozen due to the Interactive Gambling Act of June 2011, which doesn’t allow non-native companies to provide “an interactive gambling service to customers in Australia”.

The act also states that a breach of the rules – which only currently applies to casino games – will result in fines of AUS$1.1 million every day.

However, there is a growing fear that this law will be extended to include online poker sites as the AFP and FBI investigate Aussie bank accounts used by sites such as PokerStars to gather money from players. In fact, PokerStars has an office in Sydney – manned by 200 staff – that is run by subsidiary firm GP Information Services, although they claim that only non-Australians can make use of the service.

This can only be bad news for those thousands of poker players who do use of PokerStars’ online poker services.

While Full Tilt Poker and PokerStars are banned from advertising their services in Australia, they bypass this problem by providing sponsorship for two of the country’s biggest rugby league sides, Sydney Roosters and Cronulla Sharks, and backing free poker leagues in pubs, as well as utilising celebrities like world-famous cricketer Shane Warne to promote their sites.

But all this could soon come to an end, if the AFP gets its way. The AFP has looked on with great interest as the FBI shut down Absolute Poker, Full Tilt Poker and PokerStars last month while also arresting many of the companies’ founders on charges of fraud, bribery and money laundering.

The United States made it illegal for companies to supply online gambling facilities back in 2006, although poker sites based in places such as Ireland, Alderney and the Isle of Man have continued to operate in the US – much to the chagrin of the authorities.

The FBI caught a big break last year when officials arrested Aussie technology mogul Daniel Tzvetkoff while the 28-year-old was in Los Angeles for an Internet billing seminar.

Tzvetkoff is alleged to have created the method that allowed poker websites to launder countless of millions of dollars, although he is now staying in a safe house in New York after becoming an informant.

But the Australian Securities and Investments Commission (ASIC) is now thought to also be investigating Tzvetkoff for forging books and fraud in relation to Intabill – his online payments service that is no longer operating.

It appears the FBI has urged the Australian Federal Police to go after two of the largest online poker sites, Full Tilt Poker and PokerStars, although, while confirming that there had been a request for assistance, the AFP would not reveal any further details for “operational reasons”.

This must be worrying to Aussie poker players as the AFP could well be considering imposing fines by seizing money from those sites’ bank accounts – thus putting them in the same position as millions of American players.

But it gets worse as the Department of Broadband, Communications and the Digital Economy (DBCDE) has said it previously contacted the AFP with a list of poker sites that it believes are breaking the law, although police have not yet made any prosecutions.

That’s not all, however, as John Lawler – the Australian Crime Commission’s chief executive – has supposedly recommended that federal police take action against illegal sites as “online gambling is a potential channel for money laundering and revenue and taxation fraud”.

Certainly, it appears that the net is closing on poker websites and any crackdown would hit Aussie players hard – including many who have won over AUS$1 million, tax free, over the past couple of years.