The Aussie Millions – Australia´s premier live poker series – is up and running down under, with twenty valuable events scheduled over the next seventeen days. 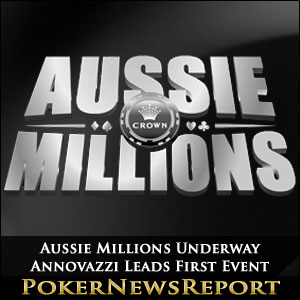 The Aussie Millions – Australia´s premier live poker series – is up and running down under, with twenty valuable events scheduled over the next seventeen days.

317 players converged on the Crown Casino in Melbourne yesterday to take part in the opening event of the 2014 Aussie Millions – a AU$1,100 buy-in re-entry tournament with three opening flights which was won last year by UK poker player Rupert Elder for AU$250,000 (US$217,740).

Just 34 players survived the thirteen levels of action yesterday (30 minutes for Levels 1-4, 40 minutes thereafter) to carry chips through to Sunday´s conclusion of the event after two more opening flights are played today and Saturday.

Current chip leader is Alex Annovazzi, who bagged up 225,200 chips at the close of play to have a twelve big blind advantage over Stefano Accardo (175,500 chips) and Jason Pritchard (174,400 chips). Other notable players to make it through Day 1 of the 2014 Aussie Millions opening event included Australian Poker Hall of Famer Gary Benson (119,100 chips) and Daniel Laidlaw (67,100 chips).

Re-Entry Possible for Those Who Bust

Among the players who appeared at the Crown Casino yesterday, but failed to progress at their first attempt, were Marvin Rettenmaier, Jim Collopy, Anthony Hachem, WSOP bracelet winners Andy Hinrichsen and Jackie Glazier and 2012 WSOP November Niner Jake Balsiger.

Those big names, and the other players who bust from the opening flight, have the opportunity to re-enter in today´s Day 1B or Saturday´s Day 1C (or both) and join the likes of Annette Obrestad and Leo Boxell, who are already confirmed entries for Day 1B.

With a steep tournament structure and only 10,000 starting chips, between 120 and 150 players are expected to return for Sunday´s conclusion to the opening event of the Aussie Millions 2014, and readers can find out who triumphs in the event by following @PokerNewsReport on Twitter.

Looking Ahead to the Rest of the Aussie Millions Series

Some big names are expected to attend the Aussie Millions as the series moves towards its AU$10,000 buy-in Main Event. Chris Moorman is already in town and Phil Ivey has indicted that he will attempt to double up on the AU$250,000 Super High Rollers event that he won in 2012.

The Main Event does not get underway until next Sunday (2nd February), with the AU$250,000 Super High Rollers starting the following weekend (9th February) in what could be a sensational climax to the 2014 Aussie Millions series.