The Aussie Millions will play host to the second of its $250,000 buy-in Super High Roller events come January. 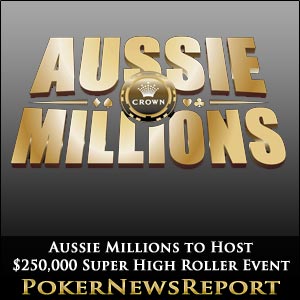 The Aussie Millions will play host to the second of its $250,000 buy-in Super High Roller events come January.

The Melbourne poker event is certainly approaching fast as the poker world eases its way towards another new year of brilliant bluffs, crazy calls and, of course, bad beats.

And you can be sure we’ll see all that and more when some of the game’s biggest names line up Down Under for an event that will start 2012 off with a bang.

There had been major worries among poker fans, players and commentators alike that the tournament would not make next year’s calendar of events.

But all those concerns appear to have been unfounded as numerous star players have already signed up for the eagerly-awaited event, including Poker Hall of Famer and eight-time World Series of Poker (WSOP) bracelet winner Erik Seidel, who won this year’s tournament to pick up a rather healthy $2,472,555 after seeing off 19 other players at the Crown Casino.

A Crown Poker source also confirmed that Tony Bloom, James Bord, Sam Trickett and Patrik Antonius will all be in Melbourne for this incredible event, while several other big-name pros – such as Tom ‘durrrr’ Dwan, Dan Shak and Dan ‘Jungleman’ Cates – are even now finalising their plans to take part.

Of course, as is to be expected, the select field will also include more than a few wealthy Chinese businessmen.

If next month’s event can even come lose to matching that of this year, then we are in for one superb spectacle.

There aren’t many events that supply $1 million-plus payouts to the top three finishers, but Seidel was joined by runner-up Trickett and third-placed Benyamine in that club, with the British star leaving Australia with $1,384,631 and the Frenchman taking home $1,087,924.

If you are hoping to brush shoulders with some of the globe’s best poker players – and maybe even cause a few upsets – at the Aussie Millions, then head on over to [geolink href=”https://www.pokernewsreport.com/partypoker”]PartyPoker[/geolink] to sign up for one or more of the satellites at this wonderful poker room.

There are freerolls running already, as well as $2 qualifiers, that can ultimately lead to the winning of $16,000 Aussie Millions packages that include the $11,400 buy-in to the main event.

So, can Seidel retain the trophy? Or will we see a delighted Dwan or brilliant Bloom walk off with one of the world’s premier titles?

There are certainly no guarantees in poker, but you can be sure we’ll keep you right up to date come January.