The 2014 schedule for Australia’s prestigious summer series has been unveiled. 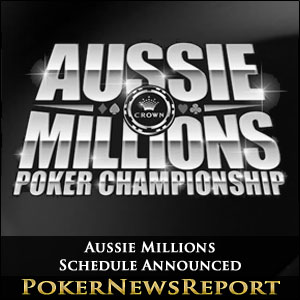 The 2014 schedule for Australia’s prestigious summer series has been unveiled.

Behind the WSOP and the WPT, the Aussie Millions is probably the biggest and most anticipated series of live poker tournaments in the world. Now in its 18th year, the international event is famous for attracting top professionals, and awarding winners with life-changing money.

This year’s iteration will feature 20 events, including 19 preliminary events and an illustrious Main Event. The series is set to launch on January 23, and will run through February 10. Buy-ins for standard events will range from a modest AUD $1,100 all the way up to AUD $10,600.

Australia’s Crown Melbourne Casino will also play host to three special high-roller events. High-rollers have become particularly popular of late, with today’s top pros relishing the opportunity to play for increasingly higher stakes. They’re also known to attract larger televised audiences. Both the WPT and the WSOP have added high-rollers to their schedules, and the Aussie Millions will follow suit by offering a $25k, $100k and a staggering $250k buy-in event.

Upping the ante even further, all events sans the Main Event will allow players who bust the chance to re-enter. However, re-entries are limited to one per tournament. The only exception is the Super High Roller, which will allow for unlimited reentries through the first four levels. Yes, you heard that right: players can theoretically drop upwards of a million dollars on a single tournament.

Satellites for the Main Event will begin running before the festivities begin and throughout the early portions of the series. Last year’s title was won by Mervin Chan. In honor of his achievement, Chan has had Event #12 – The Mervin Chan Classic $1,100 NLHE tournament – named after him. Chan’s Main Event victory was good for over $1.6 AUD – a number tournament directors hope to eclipse this year.

On a side, the Aussie Millions gained notoriety in the States when famous poker pro Gus Hansen took down the title and $1.5 million AUD in 2007. He then went onto to write a book entitled “Every Hand Revealed,” in which he describes every hand he played during the event in detail.

The Aussie Millions will begin shortly after PokerStars premier live tournament series, the PCA, rendering the often slow month of January one of the hottest times for live poker in the next year.