Nate Silver, who achieved fame by correctly predicting the winner of all 50 states in the 2012 presidential election, will be competing at the Aussie Millions. 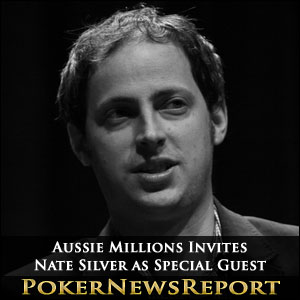 Nate Silver, who achieved fame by correctly predicting the winner of all 50 states in the 2012 presidential election, will be competing at the Aussie Millions.

Invited as a special guest of Crown Casino in Melbourne where the Aussie Millions is currently underway, Silver is scheduled to arrive on Jan. 25 and has confirmed that he will play in the AUD $10,600 Main Event that is slated to begin on Jan. 27. The Main Event will feature an estimated first place prize of AUD $2,000,000.

Silver wears many hats along with his political prognosticating abilities that include those of renowned writer, sabermetrician, statistician, and semi-professional poker player. Silver has drawn on his poker-playing experience and credits the game for helping him develop an analytical mind.

Poker played a major role in helping my life to become what it is today, and is a great way to develop the critical-thinking skills that allow us to make better decisions under conditions of uncertainty, Silver said. No venue puts those skills to the test more than a tournament like Crown’s Aussie Millions Poker Championship with elite players from all around the world.

In the 2008 U.S. presidential election, Silver’s predictions were successful in 49 of the 50 states, missing only Indiana. Prior to amazing political pundits with his phenomenal prediction success, Silver developed a baseball statistical formula that predicted the performance and career development of players which he sold to Baseball Prospectus. The 35-year-old has also authored a number of books on America’s favorite pasttime, including Baseball Between the Numbers, It Ain’t Over til It’s Over, and Mind Game.

Silver’s newest book, The Signal and The Noise: Why Most Predictions Fail – But Some Don’t, came out last November and has risen to the New York Times bestseller list. The political guru has also written for a number of other publications, including Vanity Fair, Newsweek, and his blog at FiveThirtyEight.com.

When Silver was asked last year about the chances of poker legislation receiving approval at the federal level, he did say that lobbying efforts and the fact that poker has become more mainstream in society does give it a fighting chance somewhere down the road.