Day 3 of the 2014 Aussie Millions Main Event came to a close when Salvatore Fazzino eliminated Gareth Dwyer to head the 36 players that remain in the tournament. 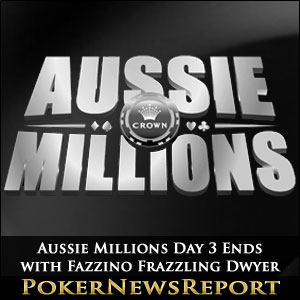 Day 3 of the Aussie Millions Main Event was pivotal in terms of whose pockets the majority of the prize money will end up in. Several players made strong runs up towards the top of the leaderboard, while others flattered to deceive and were sent home with min cashes, or no cashes at all.

At the end of another six levels of action, Salvatore Fazzino heads the remaining thirty-six players after busting former chip leader Gareth Dwyer J♣ J♦ > 4♣ 4♠ in the last hand of the night, when both players flopped a set and Dwyer could not find the one-outer to save him from elimination.

Fazzino is already assured of his largest ever lifetime poker tournament cash, and will be the target for a plethora of more experienced poker players when play resumes on Friday – with players such as Scott Seiver, Sorel Mizzi, Jonathan Duhamel and Erik Seidel still in the hunt for the AU$1.6 million first prize.

109 players took their seats at the Crown Poker Rooms in Melbourne on Day 3 of the 2014 Aussie Millions Main Event – knowing that 37 would be eliminated before the money bubble burst – and consequently there was some fairly nervous activity at the tables during the first 2½ levels.

Those who started Day 3, but failed to survive to line their pockets with cash, included former WSOPE Main Event winner Annette Obrestad – whose Q♥ Q♦ failed to improve past Tam Truong´s K♦ K♠ – Full Tilt Poker ambassador Tom Grigg, and hi-roller Paul Newey – who had a chance of doubling up with 9♠ 9♣ against the A♠ J♠ of Bob Trask, until the board delivered 7♠ Q♦ J♣ / A♦ / J♥.

No Sympathy for Luke Downes the Bubble Boy

Luke Downes had the misfortune to be the Aussie Millions bubble boy, but players who have been in his situation before will have little sympathy for him. Downes was extremely short-stacked with 9,000 chips in Level 16 (blinds 2,500/5,000 – ante 500) and in the Small Blind when he shoved into Florian Bussman´s Big Blind.

Downes A♥ 8♠ held against Bussman´s 8♦ 2♦ to double him up to 22,000 chips, but in the very next hand he unnecessarily shoved again with K♣ J♣ and was called by Patrick Healy in the Big Blind – who had Downes dominated with A♣ Q♣. Both players paired their hand on the flop of A♥ 4♦ K♥, and the 10♥ on the Turn gave Downes the opportunity to make a gutshot straight; but the 9♦ was a brick for Downes, and he was eliminated from the 2014 Aussie Millions Main Event to the delight of the 72 remaining players.

Downes´ elimination signalled a fall-out frenzy during which time dozens of players risked their tournaments lives on the turn of a card – and lost. In addition to chip leader Salvatore Fazzino, six other players closed Day 3 of the Aussie Millions Main Event with more than a million chips, and many of them added to their impressive stacks during this period

Looking Ahead to Day 4 of the Aussie Millions Main Event

Friday´s Day 4 will start with thirty-six players facing ten minutes of Level 19 before the blinds increase to 6,000/12,000 with a 2,000 ante. Play is scheduled to continue until a final table of six remains – with the six finalists having a day off on Saturday (to let the hi-rollers have their moment of glory) before concluding the Aussie Millions Main Event on Sunday.

An interesting seat draw for Day 4 of the Aussie Millions Main Event sees three of the four chip leaders drawn together on the same six-handed table (Fazzino, Rabinowitz and Mizzi), and one very tough Table 27 which sees last-woman standing Liv Boeree with position over her PokerStars teammate Jason Mercier, but due to act before John Juanda, Ami Barer, Jonathan Duhamel and Jeff Rossiter. Good luck Liv – we think you might need it!