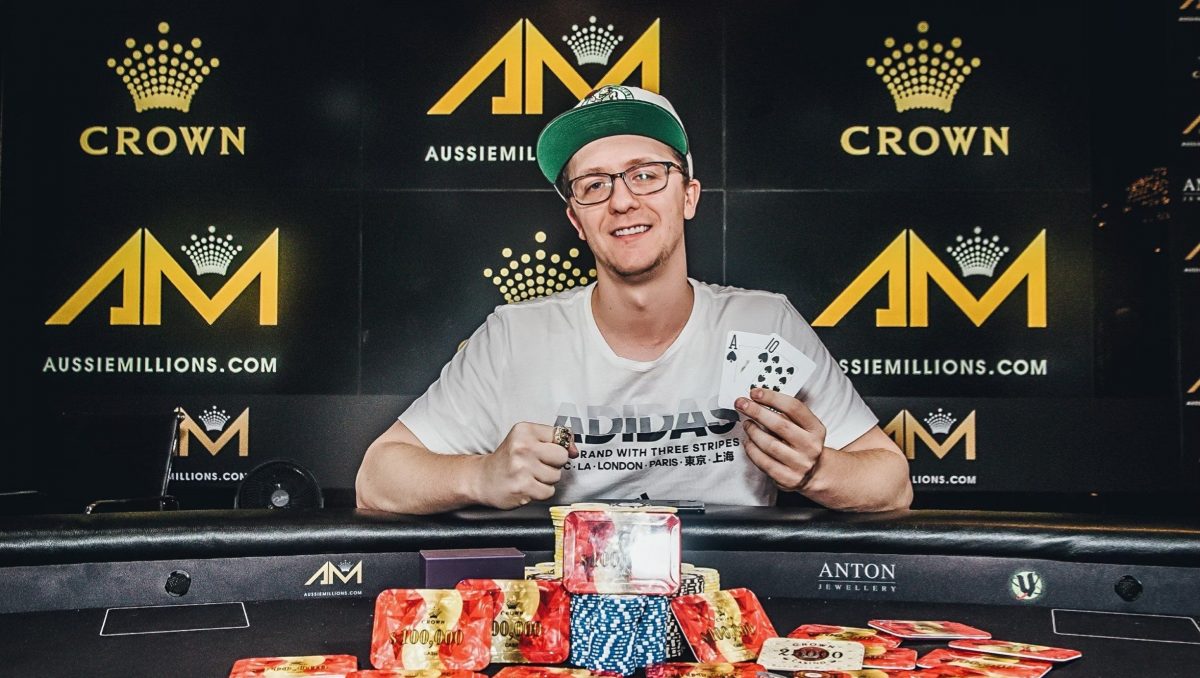 It’s true what they say – playing on the home court is a huge advantage in all sports. It seems that poker is one of the games where this rule is also applicable, even though poker players do not play in front of thousands of live spectators.

That’s one of the reasons why Kahle Burns, the most popular poker player from Australia at the moment, managed to win the Aussie Millions A$100,000 Challenge, which took place in the Land Down Under.

He emerged as champion of this prestigious event, winning a total of A$1,746,360, which is approximately $1.2 million. This victory is yet another proof of how Burns is currently dominating the poker world.

Since the start of 2019, he has managed to win more than $6 million in live cashes, as stated in his official Hendon Mob profile.

However, this victory doesn’t seem to be the most important event for him right now. As a matter of fact, Burns received much more important recognition at the start of Aussie Millions.

He was inducted into the Australian Poker Hall of Fame, which is a huge achievement for any poker player from the Southernmost Continent. Winning in this event only proved that the choice for Hall of Fame introduction was far from arbitrary, and that Burns is indeed one of the best poker players in the world at the moment.

He did not have an easy job, even though only 54 entries were recorded for the event. The majority of them were successful poker players that all had but one goal — to win the first prize. In the end, it was this talented Australian who claimed the biggest share of the prize pool.

The Final Table — Other Players Who Made It to the End

The start of Day 2 wasn’t particularly good for Burns, who actually almost dropped out at the time the final table was formed. As only the top seven players were to make it to the money list, Burns immediately started his amazing poker strategy, only to move up in a four-hour stretch that saw no eliminations take place.

After that, two players from the final table had to hit the rail with no money, and the final seven continued with a sort of relief, knowing that the bubble burst.

The first player to drop from the pursuit of the final prize was Timothy Adams from Canada, who earned a total of A$317,250. He was soon followed by the popular player from the UK, Sam Grafton, who took home A$370,440.

The next one in line was Michael Soyza from Malaysia. Soyza earned A$423,360 as the fifth-place player. One of the most successful live poker players in the world at the moment, Bryn Kenney, managed to go as far as fourth place, earning a total of A$582,120.

Finally, the last player to hit the rail before the two best ones could engage in a heads-up duel was Aaron van Blarcum, another successful American poker player. Van Blarcum won a total of A$740,880.

The final opponent that Burns had to face was Alex Foxen. The two players are rather familiar with each other, as they had their fair share of high-roller final tables around the world.

Although Foxen played great poker, the heads-up play was the time when the crowd played a very important role. Being on a home court, Burns had all the support he needed to gain confidence and finish off Foxen in a short heads-up session.