Online poker behemoth PokerStars recognizes its VIP Members through a series of promotions. 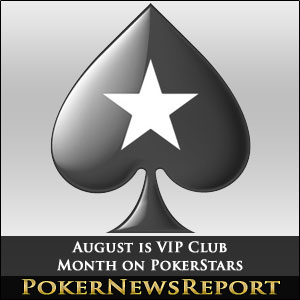 Online poker behemoth PokerStars recognizes its VIP Members through a series of promotions.

In preparation for the upcoming World Championship of Online Poker (WCOOP) Pokerstars has announced that August is VIP Club Month. For the next four weeks and change, the site will gift VIP Club members with a wide array of promotional opportunities.

The $1M VIP Giveaway is the most noteworthy promotion. Consisting of five tournaments, VIP members will be able to compete for cash and WCOOP tournament tickets. However, unlike traditional tournaments, that require some measure of skill, these tournaments will force players all-in every hand, rendering it more a luck-fest than a standard tournament.

VIP Club Happy Hours will run more frequently between August 5th and 11th. During them, players will earn 50% more Frequent Player Points (FPP). PokerStars will also be running sales on various VIP Store items from the 9th through the end of the month.

On the final day of the promotion (August 31st) PokerStars will be hosting a huge satellite to the WCOOP Main Event. In total, 100 seats will be given away, equating to $520,000 in prizes. Smaller satellites will be running for as little as 5 FPPs.

In reality, becoming a VIP member on PokerStars is as easy as making a real-money deposit. All new members start out as Bronze Members. By accumulating VIP Player Points (VPPs) they will have the opportunity to “rank up.” There are seven tiers in total, and points are accumulated by paying rake and tournament fees. Truly committed players who achieve top tier status (SuperNova Elite) are eligible for tens of thousands of dollars in rakeback and other gifts, including an entry into the WCOOP Main Event. By ranking up, players will accumulate points faster, and gain access to VIP only tournaments, among other benefits.

Unfortunately, players from the U.S will be missing out on this awesome opportunity. Stay tuned for more news on when PokerStars will be returning to the states.