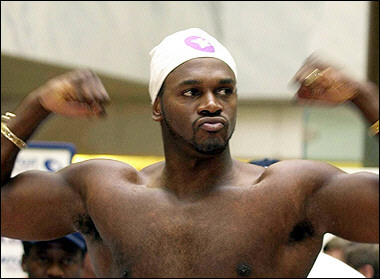 Audley is no stranger to poker and has been playing for several years with his best results being $76,895 in a 2007 Bellagio Cup event and $90,298 in a Venetian Deep Stack event where he finished in third place.

Audley honed his poker skills by learning the game playing against some of the toughest cash-game players in the world. Instead of starting in smaller stake games, he took a seat in the Bellagio playing the $5/$10 and $10/$20 games but already he is feeling comfortable with the game and feels he can hold his own against the top players because it is tough to read him, yet he feels he can read other players well and that he has figured out how odds are multiplied etc.

He has also found success in some online poker tournaments on Full Tilt Poker. He enjoys participating in the FTOPS and his best result online was 13th in the Full Tilt $1 Million Guarantee, however he was disappointed and felt he should have at least made the final table due to being chip leader for quite a while in the tournament. Now that he has become a Red Pro he has set his sights on winning either the $750k Guarantee or the $1 Million Guarantee within the next 12 months.

Currently Audley has taken a break from poker to focus solely on his upcoming world title fight against David Haye, which takes place in Manchester on November 13th. Audley actually mentored Haye but now the two have had various exchanges of words and fans are excited to see one of the most anticipated all-british Heavyweight boxing bouts. You can watch the title fight exclusively on Sky Box Office.

This is the third big signing in just as many weeks with PokerStars recently announcing they have signed former UB Poker pro Liv Boeree and top Russian poker player Maxim Lykov.