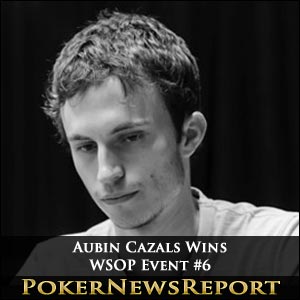 The 21-year-old online pro – who moved to Malta last month to continue playing the game he loves on the internet – picked up a rather handy $480,564 in prize money after defeating American Joseph Cheong heads-up in a very tough match in the $5,000 buy-in No-Limit Hold’em Mixed-Max tournament.

With the event running over its scheduled end date into a fifth day due to the marathon semi-final between Cazals and Australian Warwick Mirzikinian, the French player and California’s Cheong returned to the Rio All-Suite Hotel & Casino to face-off for the title at midday local time yesterday.

Unfortunately, as with the semi-finals, this heads-up battle was more of a crawl than a race – in part due to how deep their starting stacks were when play commenced with the blinds at 4,000/8,000 and a 1,000 ante.

Cazals, however, was delighted with his success from his first cash and first final table, believing his youth and endurance prevailed in the end when outlasting his final opponent – even though he was very tired. Age really shouldn’t have been a factor, though, as Los Angeles’ Cheong is just 26 years old – and not exactly a veteran!

South Korean-born Cheong held 3,112,000 chips while Montserrat’s Cazals started with 3,018,000 – both holding more than 377 big blinds – so there was always a chance the few gathered railbirds would be in for another test of endurance.

Five Hours In, Then Boom!

Amazingly, though, the final heads-up of this event lasted ‘just’ five hours before Cazals – with the blinds still only at 10,000/20,000 and a 2,000 ante – suddenly found himself crowned champion.

Cazals checked his cards before calling to show K♠ K♥ while Cheong tabled 4♥ 4♣ ahead of a K♣ 7♠ 3♠ flop that gave Cazals trip kings and a huge advantage. However, Cheong still had outs, with a running five and six making a straight. But the 7♥ turn ended those dreams before the meaningless 9♣ arrived on the river.

Tournament staff checked the chip stacks to verify Cazals as champion and, once that was completed, the few onlookers responded with a polite round of applause as Cheong moved away to collect his cheque for $296,956 as runner-up.

It seemed strange at the time that Cheong, who has finished third in the 2010 main event, pushed so hard with a pair of fours, but he did later admit to misreading a tell on Cazals – making him assume that the Frenchman was bluffing.

Cheong thought he sensed weakness in Cazals, which prompted him to raise all-in, but the Frenchman stated that, while he wasn’t playing very aggressive, he does believe that his American opponent made “a mistake” on that hand, although he did add that Cheong had been playing very well before that fateful error.

Still, having spent so much time together at the final table, a friendship appeared to blossom during their heads-up match, with Cazals confirming that we were laughing and joking about the match last night and now we have played for five hours together and are friends.

A total of 409 players started the event to create a prize pool of $1,922,300 – with another Frenchman, Ludovic Riehl, picking up $9,503 in 44th place as the first player to cash after the money bubble was burst.