The Partouche Poker Tour 2012 will be the last ever after Partouche´s CEO announces he has had enough of the criticism. 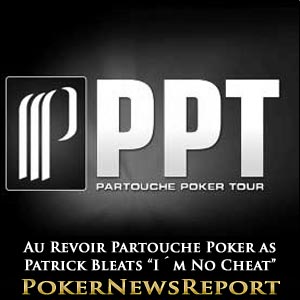 The Partouche Poker Tour 2012 will be the last ever after Partouche´s CEO announces he has had enough of the criticism.

Claiming that he, his family and his staff were upset by the reaction of players to the €700K prize shortfall , Partouche announced he was closing the whole thing down and attempted to shift the blame from his company´s negligence to young players with a lot of ego and in need of recognition, who have not even made the final table and call us cheats and thieves.

Partouche used the opportunity to insist there had never been any guarantee offered on the event despite evidence to the contrary. He added that the impression of a €5 million prize pool for the Partouche Poker Tour Main Event may have originated from a “clumsy and euphoric bit of communication” at the conclusion of Sam Trickett´s dramatic win in the 2011 Main Event.

However, in addition to the thousands of screenshots that effectively proved Partouche was lying, Nicolas Levi (who is actually not that young, has almost $2 million in career earnings and features 12th on the French all-time money list) posted an excerpt from a TV Poker show on YouTube in which Jean-Jacques Ichai – the marketing director for Groupe Partouche – announces that Partouche are guaranteeing the Main Event of Season 5 of the Partouche Poker Tour to the tune of €5 million Euros.

If you want to watch the video on YouTube, English subtitles are available by clicking on the “captions” button. Rumours have already hit the Internet that Ichai has announced his resignation with immediate effect on his Facebook page and then withdrew it.

David Vamplew – who still remains alive in Day 3 of the Main Event – tweeted:-

One Final Word from Patrick Partouche

Partouche departed his “press conference” by saying that he would see [the players] the International Stadiums Poker Tour event at Wembley next year. Online qualifiers for the ISPT have just been announced on Partouche.fr. How much “culot” has this man got?