The Atlantic Club’s owners filed court papers in response to PokerStars’ lawsuit that seeks to complete the acquisition agreement for the New Jersey casino. 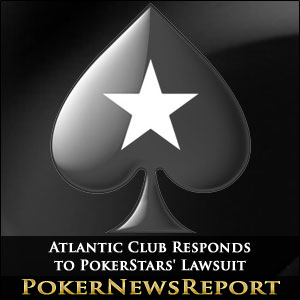 The Atlantic Club’s owners filed court papers in response to PokerStars’ lawsuit that seeks to complete the acquisition agreement for the New Jersey casino.

The defendants have asked Judge Batten to reconsider the temporary restraining order (TRO) that he granted PokerStars last week upon the filing of the civil complaint. The TRO prevents the Atlantic Club from entertaining other offers for the casino until the court can determine whether or not time has expired on the acquisition agreement.

That agreement specifies that PokerStars must have secured a casino operating license by April 26 or the contract can be terminated. PokerStars’ casino license application won’t be ruled upon by gaming regulators until August. PokerStars’ cited the New Jersey Casino Control Act in arguing that a purchase agreement cannot be terminated while a casino license application is still pending.

The Atlantic Club’s argument centers around the fact that the casino would be irreparably harmed if they are forced to wait several months for PokerStars to obtain a license. With online gambling legislation signed by Governor Chris Christie in February and online sites expected to be up and running later this year, the casino owners reason that the Atlantic Club’s value is extremely high at this time.

The defendants also argue that the likelihood of PokerStars receiving a favorable ruling from New Jersey gaming officials is relatively low. In support of this argument, the Atlantic Club points out that former PokerStars’ executives Isai Scheinberg and Paul Tate remain fugitives from justice. Both were indicted in the Black Friday allegations in 2011 and neither has set foot on American soil to answer to the charges.

The Atlantic Club further contends that Scheinberg continues to act in an executive capacity with the company based on a phone call between he and Atlantic Club Chief Financial Officer Eric Matejevich just prior to the expiration of the contract. As part of the settlement agreement between PokerStars and the U.S. Department of Justice last year, Scheinberg agreed to no longer be involved in company affairs. If he is continuing in various day-to-day activities in running the company as the Atlantic Club claims, that would be a serious violation of the deal with the DoJ.

The Atlantic Club’s arguments are similar to those made by the American Gaming Association two months ago. The AGA filed a petition with the state Division of Gaming Enforcement that urged regulators to deny PokerStars’ attempt to purchase the casino because of their shady business practices that included violating the UIGEA in 2006 and continuing to operate in the U.S. market. PokerStars shrugged off those accusations as coming from a casino lobbying organization intent on controlling market share for their clients.

Another matter addressed in PokerStars’ lawsuit is that $11 million has been paid to the Atlantic Club since last year in accordance with the purchase agreement and to keep the club running. Another $4 million would be payable upon termination of the contract. PokerStars asserts that the casino’s purchase price is $15 million, which would leave the buyer empty-handed should the agreement be negated as the Atlantic Club is seeking to do.

The Atlantic Club’s answer to that charge is, basically, tough luck. The casino believes that PokerStars took a risk in agreeing to purchase the Atlantic Club in hopes of entering the U.S. online poker market in New Jersey. The fact that a casino operating license was not in place by the agreed upon date of April 26 is PokerStars’ own fault. The Atlantic Club contends that it’s merely honoring the agreement. That agreement has expired and the casino is ready to move on and locate another buyer.

This saga will continue as PokerStars may file a reply to the Atlantic Club’s brief. Judge Batten has scheduled oral arguments on the issue to be presented at 1:30 p.m. ET on Friday, May 17.