The Atlantic Club Casino Hotel filed for bankruptcy protection yesterday in order to stave off its list of creditors. 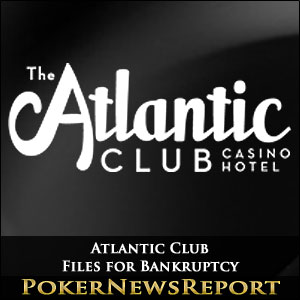 The Atlantic Club Casino Hotel filed for bankruptcy protection yesterday in order to stave off its list of creditors.

The casino is one of only two in the state that has not named a partner in New Jersey’s upcoming online gambling launch scheduled for November 26. The Revel casino is the other, and that struggling brick and mortar went through bankruptcy proceedings earlier this year.

In citing reasons for Wednesday’s Chapter 11 filing, Atlantic Club COO Michael Frawley told the Press of Atlantic City that the market has taken longer to rebound than we had hoped.

That market has seen seven years of declining revenue due to competition from casinos in neighboring states. In fact, many will agree that the only chance of Atlantic City casinos turning revenue numbers around is via Internet gambling. But the Atlantic Club won’t be part of that under the current ownership, with indications being that the casino will hit the auction block with a starting bid in the ballpark of $15 million.

Astute readers will recall that $15 million is the same purchase price agreed to with PokerStars late last year before Atlantic Club owners wiggled out of the deal due to a contractual technicality. PokerStars failed to obtain the blessing of state gaming regulators by a specified date, allowing the Atlantic Club to keep $11 million that had already been paid toward the purchase price.

PokerStars continues legal maneuvering in hopes of getting back that $11 million. Meanwhile, the industry’s top poker site has hitched its wagon to the Resorts Casino and plans to open a new live poker room in addition to entering the U.S. online gambling market.

But all that is dependent upon the New Jersey Division of Gaming Enforcement, who has been playing its cards close to the vest in determining whether or not PokerStars will obtain rubber-stamped approval. It is difficult to imagine PokerStars being denied, considering that New Jersey’s online gambling statute has no bad actor clause and parent company the Rational Group has announced elaborate plans to headquarter its U.S. operations in the state and provide a tremendous boost to the New Jersey economy.

Apparently, the Atlantic Club has been seeking a new buyer since the courts allowed the deal with PokerStars to be nullified. There were a number of potential suitors who made their desire of Atlantic City casino ownership known, but it appears that a deal for the struggling casino could not be reached.

The Atlantic Club will continue operating while bankruptcy proceedings meander through the court. The casino is owned by Colony Capital LLC.