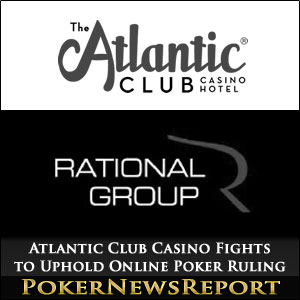 Rational Group and Atlantic Club Casino are embroiled in a legal battle after the casino terminated a purchase agreement between the two parties. Following the termination, Rational Group took the casino to court where a judge upheld the actions of the owners of the casino and released them from the deal. Rational Group is now appealing the decision.

A brief submitted by lawyers of Colony Capital LLC states that the judgment was erroneous as it was based on a deadline in the agreement. The aim of the deadline, which was set as April 26, was to give the Rational Group, owner of PokerStars, a timeframe for securing the approval of the New Jersey gaming regulator for the purchase of the property. By setting a deadline, both parties were given the right to terminate the purchase agreement if preliminary approval was not granted by the regulator within the set time.

In addition, the agreement did not come with a requirement for the Atlantic Club Casino to repay the $11 million advance that was paid should either of the parties terminate the agreement.

Both parties were represented by competent lawyers and according to Colony Capital, Rational Group had their eyes wide open when they signed the deal. That deal was signed in December 2012 when it remained uncertain if online gambling would be legalized in New Jersey. The deadline came and went and now, Rational Group has to live with the consequences of the agreement.

According to the lawyers, it has become clear this year that Rational Group will likely have trouble getting a casino license to operate in New Jersey, partly due to their settlement with the US Justice Department last year on charges of alleged money laundering, bank fraud and illegal gambling.

Rational Group agreed to buy the property for the low sum of $15 million, but to also fund a shortfall of $32 million in casino employee pension accounts and invest between $20 million and $40 million into the property at the completion of the deal.

A panel of appeals court judges will hear the matter and it could take several weeks for a ruling to be made.