At Last! Adelson in Victory against Online Gambling

Sheldon Adelson´s Las Vegas Sands Corporation has won a court case against online gambling sites – although it is unlikely that they will ever collect. 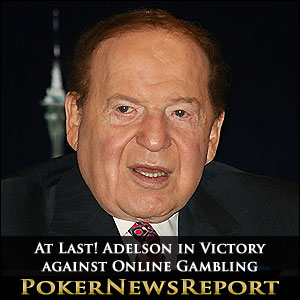 Sheldon Adelson´s Las Vegas Sands Corporation has won a court case against online gambling sites – although it is unlikely that they will ever collect.

Las Vegas Sands claimed that the sites – which redirected visitors to online gambling sites such as 368.com and 22v.com – were infringing the company´s trademark, sending visitors to a false destination of origin and diluting the name of the company – an offense under the 1946 Lanham Act.

The Irony of it All!

In the lawsuit against the owners of the websites, lawyers representing Sheldon Adelson´s company claimed that the unauthorized use of the Sands trademarks and the other infringements “threatens to dilute and distract from Las Vegas Sands Corp.´s message and its efforts to stop the proliferation of online gambling”.

The company claimed that it had substantial goodwill and an excellent reputation, which was being irreparably damaged by the unauthorized use of its trademarks. The lawsuit petitioned the court to issue an injunction against the websites from using the company´s trademarks and engaging in mis-leading advertising that would associate the Las Vegas Sands with online gambling.

Last week, US District Judge James Mahan upheld the complaint and awarded the Las Vegas Sands Corporation $2 million in damages. Judge Mahan also issued a permanent injunction against the owners of the websites from using the logo, the images and any references to the company.

However, the Las Vegas Sands Corporation may have difficulty in collecting their award of damages, as the identity of the website owners is subject to “privacy protection” services offered by eNom, Inc. and Name.com, Inc., through Whois Privacy Protection Service, Inc. or by GoDaddy.com, Inc. through its affiliate DomainsByProxy, LLC.

Trademark Infringement is No Laughing Matter

Although the ironic use of the Sands Corporations´ trademarks to promote online gambling is bound to cause much mirth among those opposed to Sheldon Adelson´s anti-online gambling campaign, the issue of trademark infringement is quite a serious matter – not so much for the companies who get their trademarks copied, but for players who might be lured onto unregulated gambling sites.

When we tried to locate the domains listed in the Sands´ court action, none of them were accessible – implying that players who already have accounts registered with 368.com and 22v.com may have lost their funds. It is conceivable that these unregulated gambling sites will re-emerge under different names, promoting online gambling through similar techniques.

This is not the first time that a bona fide brick and mortar casino has had its trademarks infringed to promote online gambling. Last August, the Galaxy Entertainment Group – who owns the Galaxy Macau and Star World Hotel – warned punters of three lookalike online casinos that were using the company´s branding and, in 2012, SJM Holdings – the owners of 18 Macau casinos – posted a warning on its website that unauthorized websites were making use of its logos to promote “lucky draws”.

The unauthorized websites using SJM´s trademarks also published photos of the company´s employees to give the online gambling sites credibility. Apparently this was not a tactic used by the websites using the logos and trademarks of the Las Vegas Sands Corporation!