Asier Crespo finished Day 1B of the Estrellas Poker Tour Main Event in Madrid with more chips than anyone else – but not enough to take the overall lead. 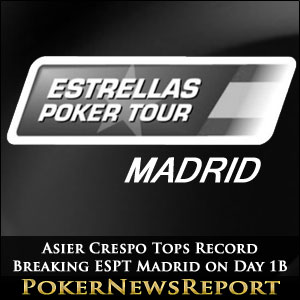 Asier Crespo finished Day 1B of the Estrellas Poker Tour Main Event in Madrid with more chips than anyone else – but not enough to take the overall lead.

Records tumbled on Day 1B of the Estrellas Poker Tour Main Event, as 502 players filled the Gran Casino in Madrid – creating a new record for a live poker tournament played in the capital, and generating a prize pool of €721,000 which will be shared among the top 103 players – with the winner collecting €131,100.

Among the record breaking entry were a number of formidable players – Team PokerStars Juan Miguel Pastor and Leo Margets headed a line-up which included last year´s ESPT Madrid winner Adrian Mateos Diaz and current UKIPT London champion Sergio Aido; but the player who headed the chip counts at the end

of the night was Asier Crespo – the player who finished fourth to Ludovic Geilich in last summer´s UKIPT Marbella.

Crespo bagged and tagged 167,300 chips after nine levels of play on Day 1B ahead of Jose Vicente Besalduch (150,700 chips) and Garcia Cayetano (133,000 chips); but he will still be a long way behind the tournament´s overall chip leader Heinz Traut, who bagged up an astonishing 230,000 chips on Day 1A when play resumes on Day 2.

Looking Ahead to Day 2 of the ESPT Madrid Main Event

Day 2 of the ESPT Madrid Main Event promises to be a very long day. 203 players survived the second opening flight, and they will be joined later today with the 83 players who played through Day 1A. The tournament is scheduled to conclude on Sunday, so there may be a few more one-hour levels played today than the nine that are scheduled.

When the players take their seats today they will be entering Level 10 (blinds 600/1,200 – ante 200). Despite there being many well-stacked players, it could be possible that the money bubble bursts late in the evening. A min-cash is worth €1,870, and although not a considerable amount to those familiar with five and six-figure scores, it will be a huge boost to the bankrolls of players who qualified for the event via online satellites at PokerStars.es.