The Asian Poker Tour will run the APT Mauritius at the Ti Vegas Casino, Grand Bay, from August 19 to 26 after a deal was signed to take the tour beyond Asia. 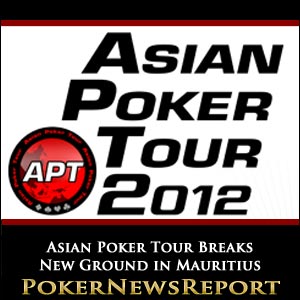 The Asian Poker Tour will run the APT Mauritius at the Ti Vegas Casino, Grand Bay, from August 19 to 26 after a deal was signed to take the tour beyond Asia.

The eight-day poker festival at the Indian Ocean island will play host to an APT Asian Series tournament, including a €900 buy-in main event, eight side events – with a Ladies Event running – and a €2,200 buy-in High Roller competition.

This event will mark the APT’s first venture outside of Asia, with a delighted tour chief executive officer Jeff Mann stating that, following requests from their regular players throughout Asia to include additional events in new locations, they have responded to the demands by adding Mauritius to their tour.

Moreover, Mann stressed that, with the success of the APT, they have been inundated with requests from event organisers, casinos and venues worldwide to host festivals.

The CEO added that he was also delighted to be working with Ti Vegas, who he considers to be among the leading casinos on the island and at the forefront of poker development in the area.

Meanwhile, Sylvain Liotard, the chief executive officer for Paradise Events and MPPL – who organise the majority of major poker events in this area – was also thrilled to see the festival come to Mauritius, saying that his companies have finally achieved our goal of bringing an APT tournament to the island.

Liotard also believes the event will be a huge success – in part because players from this part of the world know APT and will be eager to participate in such a massive tournament.

There is every chance of that happening as the APT has grown massively over the past few years, with the two events staged in 2010 growing to at least eight for this year and most likely more than 10 for 2013 – as confirmed by Mann.

If you’re looking for additional details on APT Mauritius – including the soon-to-be announced schedule of events – check out theasianpokertour.com frequently for updates.