In an environment where the majority of badges on display were for online poker sites or a payment processing company, it was refreshing to see the chip leader of the EPT displaying his love of his favourite football team – Arsenal FC. 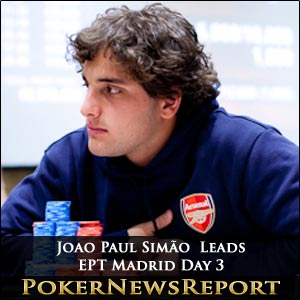 In an environment where the majority of badges on display were for online poker sites or a certain payment processing company, it was refreshing to see the chip leader of the EPT Main Event displaying his love of his favourite football team – Arsenal FC. However, the wearer of the badge does not come from Highbury, London or even the UK.

Joao Paulo Simao, from Florianopolis in Brazil may be an unfamiliar name to many outside of South America – where he has a win in an LAPT side event and a second to compatriot Andre Akkari – but those who play on PokerStars may be accustomed to “I Need Massari” picking up more than a few prizes in the major tournaments. Indeed, the 23 year old engineering student already has a WCOOP title under his belt ($215.00 NLHE Heads-Up) from 2010.

How to Become Chip Leader in 7 Not-So-Easy Stages

Starting the day in 40th position with a respectable chip stack of 169,800 behind over night leader Mike McDonald (409,800 chips) and with the blinds at 1,200/2,400, Simao practically sat out the first two levels – playing very few hands until the bubble was burst when just 72 players remained in the tournament. Then he seemed to explode into life.

Winning the biggest pot of the tournament to date when his A♦ K♠ both paired to crush Javier Etayo´s Q♣ Q♠, Simao then got taken for more than 200,000 chips when Javier Dominguez´s runner-runner straight beat the Brazilian´s set of Sixes, and Etayo took his revenge for the previous hand with a backdoor straight to master Simao´s pocket Nines.

Simao took another big hit when running into the A♥ A♣ of Ilan Boujenah before restoring his chip stack to its former glory with a flopped flush against the A♣ Q♣ of Michel Dattani. Soon after busting Dattani, Simao eliminated Efren Garcia with a Full House over Garcia´s A♦ K♥, and he finished the day in style with a dual elimination when his A♠ K♥ found a King on the river to end the tournament lives of Andries Swart (Q♦ Q♥) and Konstantinos Nanos (7♣ 7♠).

Simao takes a huge chip lead into Day 4, where the twenty-four remaining players will play down to a final table of eight. His chip stack of 1,973,000 represents a lead of 68 Big Blinds over second placed Ilan Boujenah and is nearly four times the average of the remaining players. When play resumes this afternoon at the Gran Casino in Madrid, blinds will be 6,000/12,000 with an ante of 1,000, with the first man out guaranteed a payday of €13,000, and anybody who survives through to Day 5 assured of a minimum prize of €48,000.