Arkadiy Tsinis took a rather unusual route to WSOP glory in event #38, the $1,500 No-Limit Hold’em tournament, having made his name as backgammon champion. 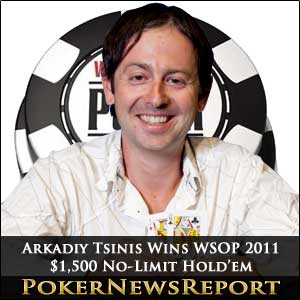 Ukrainian Arkadiy ‘Kamsky’ Tsinis took a rather unusual route to WSOP glory in event #38, the $1,500 No-Limit Hold’em tournament, having previously made his name as a backgammon champion.

He also became the third Ukrainian to lift a title this year after Eugene Katchalov took the $1,500 Seven-Card Stud championship and Oleksii Kovalchuk collected the top prize for securing the $2,500 Six-Handed No-Limit Hold’em crown.

This latest Ukrainian victory, from an original field of 2,192 players, is all the more remarkable as the eastern European nation had not recorded a single gold bracelet success before this year’s WSOP – with Tsinis making it a hat-trick by picking up $540,136 from his heads-up defeat of Russian Michael Blanovsky ($336,253).

Vegas-based Tsinis, who previously lived in New York for many years, is a talented games player – most notably in backgammon, poker and chess – although his parents were not overly happy with his career decision to turn his back on economics and finance after graduating from the City University of New York (CUNY)’s Baruch College.

The 34-year-old financial analyst, however, has since gained the backing of his doctor mother and engineer father – and they watched online as their son picked up his first WSOP bracelet as a semi-pro poker player.

Tsinis reckons his victory is “a major thing” for his family, especially as his “parents were not happy about this at first” – although he knows they “were following me on the computer…back on the east coast”.

Tsinis, who immigrated with his parents to the United States when 16-years-old, almost didn’t play the event and didn’t register until three hours after the start, when Ylon Schwartz – his best friend – persuaded him to play, even though his chip stack had by then been cut down to approximately 30 big blinds.

But the eight-year WSOP veteran, of course, overcame that disadvantage – and 2,191 other competitors – to record his incredible “accomplishment” following a previous best of 11th at the $1,500 No-Limit Hold’em event of 2009 for $57,506.

Now holding 11 money finishes for a WSOP total of $686,000, Friday’s success was obviously the best for chess master Tsinis, who was also ranked inside the world’s top 40 best backgammon players.

But he chose not to have the American national anthem played during his awards ceremony in protest at the US government’s decision to hammer online poker sites during April’s ‘Black Friday’.

Instead, he went with his native nation’s anthem, but emphasised that his decision was in no way meant to be disrespectful toward the States, and merely his way of highlighting the troubles many Americans have faced when trying to remove cash from poker sites such Full Tilt Poker, Absolute Poker and Ultimate Bet.

Tsinis pointed out that he is “very proud” of the USA, but stated that, “with the state of online poker”, he reckons everyone “should boycott (the US anthem) – not to show disrespect in any way”, but to convince politicians that “they should do something about this issue”.

However, just as important to the eastern European is the fact that, “when I first came to the US, people would ask where I am from”, although more than half “of them did not even know where the Ukraine is” – prompting the games master to hopefully “put Ukraine back on the map” as he and his fellow countrymen go on to “do big things”.

Tsinis defeated Blanovsky, who hails from Vladivostok but now lives in Staten Island, in a heads-up battles that took almost fours hours to complete over two days for the runner-up to leave with $336,253.