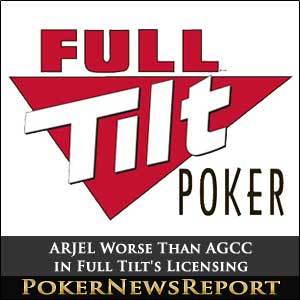 In 2010, when France enacted legislation that disallowed French online poker players from playing against players in other countries, internet poker room operators who wanted to continue providing services to poker players in France were required to obtain licensing from ARJEL, an independent administrative agency put in place to regulate the new French internet gaming law. The new law had strict requirements, including a player pool that was segregated from other countries and unusually high fees levied on [geolink href=”https://www.pokernewsreport.com/online-poker-rooms”]online poker sites[/geolink].

Full Tilt obtained a license from ARJEL and opened its fully regulated dot fr poker room as Rekop Limited in August of 2010. But when the license was issued to Full Tilt, the AGCC was already aware of some of Full Tilt’s money woes. Namely, the deposited funds from U.S. players that Full Tilt was unable to collect from its third-party payment processors, exorbitant dividend payouts allocated to shareholders and millions of dollars seized by the U.S. government because of the phony companies the payment processors purported to be in order to get players’ deposited funds through the scrutiny of banks and financial institutions. Upon obtaining its license from ARJEL, Full Tilt was already faced with serious money problems.

It makes one wonder just how much effort is put forth by these licensing bodies when a poker site applies for a license. Isn’t there a process whereby the regulators examine the books and solvency of the licensee? Wouldn’t it be prudent for ARJEL to contact the AGCC and find out some detailed information about Full Tilt before granting a license?

The poker players in France were segregated, but, apparently, the funds were not. French players find themselves in the same predicament as U.S. players, with a bevy of unpaid account balances.

The AGCC finally forced the Full Tilt shut down in June. Apparently, instead of seriously investigating the issues, ARJEL requested that Full Tilt get up and running again. It wasn’t until July that ARJEL followed suit and suspended FTP’s license.

The AGCC has been heavily criticized for allowing problems to continue at Full Tilt for several years without acting as one would think a responsible regulatory agency should. But ARJEL should also be held accountable for granting a license to Full Tilt during a time that the poker site’s liquidity and solvency were already in serious trouble.

The Full Tilt Poker debacle has shown the world that online poker needs to be legalized and regulated by active governing agencies that will protect consumers. But ARJEL proved that governmental regulation will not ensure player protection and poker site legitimacy unless the governing body actually governs.