Poker players in France are being warned against playing on unregulated poker sites in an advertising campaign which fails to hide the truth – if little else. 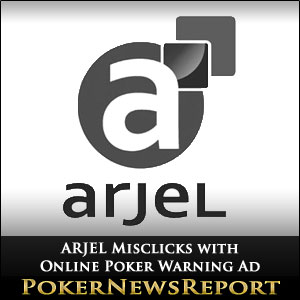 Poker players in France are being warned against playing on unregulated poker sites in an advertising campaign which fails to hide the truth – if little else.

The French online gambling authority ARJEL has launched a major advertising campaign to warn online poker players of the risks of playing at unregulated poker sites. The advert (which can be viewed here) shows naked men trying to hide their “embarrassment” with a selection of items representing the most popular sports that can be gambled online.

The advertisement starts with one naked man trying to inconspicuously make his way to a bus shelter with a football covering his genitals, and progresses through a series of scenarios in which further men attempt to ride in an escalator or retrieve their car from a car park with a jockey´s cap, playing cards and a handful of tennis balls masking their masculinity.

The message that ARJEL is attempting to promote is that by playing on unregulated gambling sites players could lose everything. The advertisement´s tag-line You have only to lose when you play on non-ARJEL regulated websites echoes ARJEL´s official line that the theft of personal and bank data and problems when trying to cash winnings are among the main issues players may incur by playing on non-licensed operators.

A spokesperson from ARJEL said that It is crucial to make players aware of the risks they take when playing on non-regulated operators, and also commented it is imperative that the organisation protects online consumers and their rights. The regulator hopes that by educating poker players about the risks of playing at unlicensed offshore poker rooms, players will avoid them and compete on French regulated sites.

ARJEL Should Have Checked Their Facts First

However, ARJEL would have considerably difficulty in justifying their claims when it comes to playing online poker in France; as most of the offshore online poker operators do not accept registrations from the land of le Coq Gaulois.

Bovada Poker, the Merge Gaming Network and the Equity Gaming Network all specifically state that French poker players are not allowed on their sites, while skins on the Winning Poker Network carry the warning that players are forbidden from connecting to the Site from a jurisdiction from which such use is prohibited.

Furthermore, none of the above mentioned networks have ever had a security breach which has resulted in the theft of personal and bank data (*), and most of the networks segregate player funds from their own operating funds. Indeed, some sites on the offshore poker networks have a more secure (and faster) cashout process than some of the regulated French online poker sites.

(*) The most recent large-scale theft of personal data affected players who had accounts with Skrill last year. Skrill is authorised by ARJEL as a payment processor in France.

ARJEL´s inappropriate and inaccurate advertising campaign could be interpreted as a desperate measure to justify its own existence. Even before the French government voted not to share liquidity with other European ring-fenced nations, the organisation has been anxious to demonstrate that it has a role to play in reversing the downward fortunes of online poker in France.

Most of the time, the regulator appears to be on the side of the poker players and operators – and in the past has campaigned for an extension of the games offered to poker players (currently limited to Texas Hold´em and Omaha poker) and a reduction in the taxation applied to operators (in order to reduce the ludicrously high rake they have to charge).

Unfortunately this current campaign is hardly likely to endear the regulator to French poker players or operators; and it is hardly likely to return any French poker players to the virtual felt. Although ARJEL has to be seen to be doing something, the commercials – which are currently being broadcast on French TV and radio – are going to damage the regulator´s credibility; or, in poker terms, represent a massive misclick!