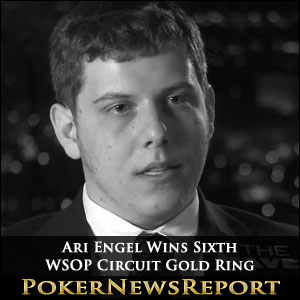 The 2013-14 World Series of Poker Circuit season has just begun, and already a newsworthy story has emerged. Ari Engel, winner of five WSOP gold rings, captured his sixth by taking down the $580 NLHE Event ($75,000 Guaranteed) at Foxwoods. Engel’s was good for nearly $30,000.

2013 marks an extraordinary year for the young pro that saw him win a gold ring in West Palm Beach and take down a $500 re-entry event at the Borgata. In total, he has made 11 final tables and has cashed in numerous other events, and although none of his cashes were for more than $100,000, he has proven a model of consistency. Engel defines what it means to be a “tournament grinder.”

But his journey towards a sixth ring would not prove easy. After navigating a field of 235 players, he would enter the final table second in chips behind Chris Rizzo. Massey would start the final table third in chips.

After finishing second in Event #4 a few days earlier, chip leader Rizzo was determined to improve upon his previous performance. He also had an opportunity to take the lead in the Foxwoods Casino Championship race away from Ryan Methia. Alas, a bad run of cards led to a fifth place exit, good for only $7,408.

Shortly thereafter, Engel and Massey would find themselves heads-up. The two friends would battle back and forth for almost an hour, with neither player able to amass an overwhelming advantage. Eventually, Engel began playing more aggressively, and started chipping away at Massey’s stack. And when the smoke finally cleared, Engel was declared the winner. Massey took home over $18,000 for his second place effort.

In an interview after the match, Engel went on record stating that “Aaron is an incredible player and I have an incredible amount of respect for his game.”

Engel has now won three WSOP Circuit events in the past 12 months, and finds himself tied with Alex Masek for the all time lead. Last season, he finished first on the National Championship leaderboard. He also has more than a dozen WSOP cashes to his name.