Australian poker Hall of Famer Billy ‘The Croc’ Argyros has taken out the APPT Melbourne Main Event, beating a field of 309 to take out the top prize. 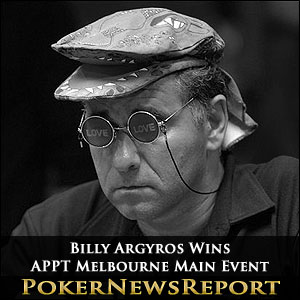 Australian poker Hall of Famer Billy ‘The Croc’ Argyros has taken out the APPT Melbourne Main Event, beating a field of 309 to take out the top prize.

Jazz Mathers was the first player be knocked out of the final table at the hands of Ravi Maravar. It came after Mathers moved all in with 9♣ 9♠ and was called by Maravar, who showed A♣ 10♣. Mathers was safe after the 8♥ J♦ 7♣ flop, but the A♦ on the turn propelled Maravar in the lead. The J♣ on the river was of little relevance, and Mathers was out of the event in ninth place.

Maravar was then himself eliminated from the final table after he was knocked out by David Tan in the opening stages. Maravar went all in before the flop with Q♥ Q♦ and was called by Yan, who had one of the few hands that could beat Maravar from the get go. That hand was K♣ K♦, which held on the board.

The second player to be knocked out of the final table was Phi Luu, who was the eventual winner’s first final table scalp. Luu, who was short stacked, moved all in with Q♣ 9♣ and was called by Argyros, who had A♦ J♥, which remained the dominant hand to put the tournament down to six.

Sixth place went to Joe Cabret, who would become Yan’s second final table scalp. Cabret went all in before the flop with Pocket Eights, and was promptly called by Yan, who showed A♣ Q♠. The 7♠ 5♦ and A♥ on the flop gave Yan one of the outs he needed, and Cabret was suddenly in trouble. The 3♥ on the turn and K♣ on the river did nothing to help Cabret, and he was sent packing from the final table.

Robert Damelian was the player who would exit the final table in fifth spot after losing his last hand of the event to eventual runner-up Bowdy Tolhopf. Like Cabret, Damelian also moved all in with Pocket Eights and was called by Tolhopf, who had A♣ 7♦.

Tolhopf was able to hit top pair on the A♦ 9♠ 5♦ Q♣ J♦ board, and Damelian was knocked out of the event to put the tournament down to its final four players.

British player Ashley Mason settled for fourth place after coming into the final table as the chip leader. Mason had a strong hand in Q♣ Q♦ when he made the decision to go all in pre flop, and was slightly ahead when the eventual winner called him with A♥ K♥.

Argyros hit a flush draw on the 9♥ 8♥ 4♠  flop, but Mason’s Pocket Pair was still good on the turn, and it looked like he was in line for a double up. The river stopped him, however, as the K♦ was the last card shown on the board, which gave Argyros the hand and sent Mason packing.

Yan who was then eliminated in third spot by Tolhopf, who moved all in pre flop with A♠ 9♠, which was actually behind Yan’s A♥ K♣. Unfortunately for Yan, however, the (9c} came on the river, giving Tolhopf a pair and ending Yan’s time in the event.

Yan’s elimination put Tolhopf and Argyros in heads-up play, with Argyros holding a slight chip lead when play began. The Croc took charge early on, however, broadening his lead before eventually going in for his last bite of the tournament.

In the final hand of the event, Tolhopf moved all in before the flop with A♣ 10♥, and Argyros pounced, calling with 8♣ 8♦. Unlike Damelian and Cabret,  The Croc’s Eights held on the {4c| 9♦ 3♣ 6♦ 3♠ board and he was declared the winner of the APPT Melbourne Main Event.