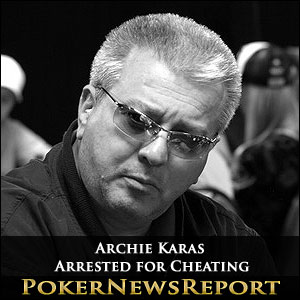 For better or worse, Archie Karas is one of most recognizable names on the gambling scene. As a poker player Archie has cashed in seven WSOP events, has made four final tables, and supposedly beat top professionals to the tune of millions back in the 1990s. It is believed that during a three-year run, Karas turned $50 into $40 million, only to lose all of it.

But Archie’s legend extends well beyond his affinity for the game. The self-proclaimed action junkie has been arrested four times since 1988 for cheating, and last week, Karas was arrested again – this time for placing subtle markings on playing cards while engaging in a game of blackjack.

Back in July, Karas took the Lakeside’s Barona Resort and Casino for $8,000 by swiping his cards over a hollowed-out chip. The chip contained dye. This die was used to help Karas identify certain cards and would ultimately help him gain a statistical edge.

Karas was taken arrested at his Las Vegas home on Tuesday. He is currently charged with cheating, burglary and winning by fraudulent methods. The arrest was announced by the San Diego County District Attorney’s Office last Friday.

The 62-year-old Karas was featured on ESPN’s broadcast of the WSOP several years ago. Referred to as a “living legend,” and a top player by the likes of Doyle Brunson and Barry Greenstein, Karas went on record stating that he didn’t care who he was playing at the poker table, and that he beat all the top pros, including the legendary Chip Reese. He claims that within 10 days of amassing $40 million, he dumped about half his bankroll into a game of Baccarat, and lost.

No reference to his prior arrests was made in the featured spotlight. However, Karas is advertised by those who know him as someone who has absolutely no fear of losing money and as a person that embraced the life of a gambler.

If Karas is convicted on all charges, he could be looking at up to three years in prison. He is being held without bail until his hearing on Monday.