The Kahnawake Gaming Commission (KGC) issued a statement regarding the DoJ settlement with Absolute Poker, but the fate of player funds is still unclear. 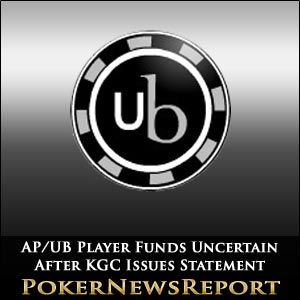 The Kahnawake Gaming Commission (KGC) issued a statement regarding the DoJ settlement with Absolute Poker, but the fate of player funds is still unclear.

In an advisory notice dated August 7, the KGC–the licensing body of both Absolute Poker and UltimateBet under the parent company of Blanca Games–confirmed that the DoJ has reached a settlement with Blanca Games that awaits court approval. Under the agreement, all of Blanca’s assets have been forfeited to the DoJ, but there will be no distribution of the net proceeds from the liquidation pending the resolution of claims filed by other parties who have asserted an ownership interest in Blanca’s assets.

In layman’s terms, this means that there are several companies who are first in line to obtain funds from whatever money remains after the assets are sold. The statement goes on to say that should the judge approve the settlement agreement and there are funds left over, at that time, the court will provide a process for players to make claims against those assets. In other words, players are seemingly at the bottom of the list in regards to repayment.

What is not fully known at this time is how much money was seized by the DoJ in relation to the Black Friday indictments of last year and if any of the seized funds will be available to players with money stuck on either AP or UB, who together made up the CEREUS Network. In observing the settlement negotiations between PokerStars, Full Tilt and the DoJ in which PokerStars acquired the assets of Full Tilt through the DoJ, it was apparent that the DoJ made repayment to players a priority in the negotiations. One would like to think that the DoJ is equally concerned about the players whose funds are stuck on AP/UB. However, there may not be much money left over following the asset liquidation process to pay the players. And there has been no white knight in shining armor to come to the rescue as was the case in PokerStars acquiring Full Tilt.

The KGC closed its statement by wishing to disassociate itself from the AP/UB fiasco by letting the public know that Blanca Games’ gaming license expired on June 2 and that the Commission no longer regulates Blanca.

It is not looking good for AP/UB players at this point, which is a complete travesty. In the Full Tilt and PokerStars settlement, the DoJ considered players to be victims of fraudulent activity, even though PokerStars admitted no wrongdoing. AP and UB players should also be considered victims, but the difference is that no one has come forth to acquire the assets and pay back players.