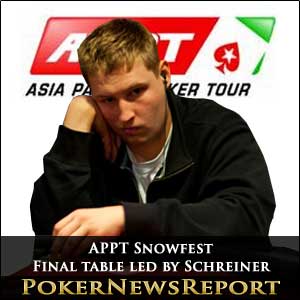 As the final table for the event is now set, only 8 players stand between the German poker player Marcel and the APPT trophy, but he faces stiff opposition from a number of experienced Australian and New Zealand poker players if he wants to be the first player to take the title of “Snowfest Champion” out of New Zealand.

Marcel and the Pack

Despite taking a chip stack more than double the size of his nearest competitor into Day 3, Marcel did not find it easy going through a particularly tricky opening session. First Day 1A chip leader, Cole Swannack shoved all-in against him on a board of 10♥ 2♥ 9♠ / 4♠ / 4♥ forcing the German to fold and then Jackson Zheng five-bet shove to take more chips from the chip leader. Marcel took a few chips back from Swannack before the first break, when his K♣ K♥ was too strong for the Kiwi´s 10♦ 9♦, and then started getting involved more as the field started to dwindle – eliminating Ben Paurini with 5♥ 5♦ against Paurini´s A♠ Q♠.

Xiao Dong Xia had a very quiet but successful day. Nursing his short-stack through the early levels, he doubled up with Q♥ J♥ against Carl Knox´s 9♠ 9♦ on a board of 7♥ 10♦ Q♣ / A♣ / 8♠ – after which he went back to sleep for the rest of the day! New Zealand poker player, Matty Yates, was the most noticeable climber up the leaderboard on Day 3. Starting the day in tenth position (100,200 chips), Matty forced a fold from Jonathan Karamalikis after committing the APPT Sydney winner to 88,500 chips and then eliminated Jackson Zheng in the Hand of the Day.

Jackson Zheng was the man who refused to give up throughout the first two days of the event, and was always bouncing back for more. Unfortunately for Zheng, even his recuperative powers could not have foreseen the hand coming that knocked him out in tenth place, and prevented him from reaching back-to-back APPT final tables.

Raising 10,000 chips from under the gun with K♣ Q♣ pre-flop, Zheng bet a further 8,500 when the flop fell 10♥ K♠ 4♦. When the Q♠ fell on the turn, Matty Yates checked, Zheng bet 24,000 and Matty checked-raised all-in. Zheng snap-called with his two pair and Matty turned over A♠ Q♥ for a pair, overcard and an inside straight draw. With the rail on its feet, the J♥ rivered Zheng and pushed Matty to within 68,000 chips of Marcel Schreiner.

Story of the Day

The story of the day belonged to PokerStars qualifiers Gavin Vickers. Gavin had started the day in 19th of the 21 remaining players, having qualified for the Snowfest Main Event via a satellite process that started with a freeroll. Tripling up in the first session of the day against Kiwi Carl Knox and Australia’s Tom Grigg, Vickers held on to his chips until boated out by Grigg in twelfth for an excellent payday of NZ$7,720.