Last Friday, the APPT Nanjing Millions Main Event was cancelled by Chinese authorities, who claimed that the organisers were engaging in “illegal gambling”. 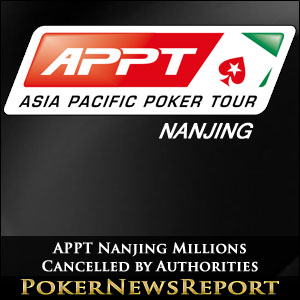 Last Friday, the APPT Nanjing Millions Main Event was cancelled by Chinese authorities, who claimed that the organisers were engaging in “illegal gambling”.

Players turning up at the Jiangsu Wutaishan Sports Centre in Nanjing on Friday for Day 2 of the APPT Nanjing Millions Main Event were shocked to see the venue barricaded by police and notices announcing the cancellation of the event due to illegal gambling.

Players and staff involved in hosting the event were told to report to the police and cooperate with their investigation. There is still no news about whether the tournament will be resumed or if players will receive a refund of their buy-ins.

Hollreiser Apologises and Looks for Answers

More than 2,300 players had entered the APPT Nanjing Millions – which had been licensed and sanctioned through the Jiangsu Provincial Chess Sports Association as a sporting event. Such was the popularity of the tournament that an additional Day 1 had to be added to accommodate all the players who wanted to take part.

Soon after the news broke that Day 2 of the Nanjing Millions had been cancelled, Eric Hollreiser – the Head of Corporate Communications for Amaya Inc. and PokerStars, who sponsor the Asia Pacific Poker Tour (APPT) – issued a statement apologising for the cancellation of the event.

Saying that the event had been organised and operated by the local poker operator “The Star Club”, and sanctioned through the Jiangsu Provincial Chess Sports Association, Hollreiser apologised for any inconvenience players had experienced and said that the Star Club planned to resume the tournament in the near future.

With the exception of China Sports Lottery and the China Welfare Lottery, both live and online gambling is officially illegal in Mainland China – with concessions being allowed for regulated gambling in the “offshore” venues of Hong Kong and Macau.

Earlier this year, President Xi Jinping announced a series of measures to control the amount of gambling that Chinese residents would be allowed to engage in. These measures included the limiting of Visas to gambling venues and the monitoring of gambling transaction through UnionPay – the only domestic bank card in Mainland China.

The measures – along with an anti-corruption drive that saw corrupt officials unable to launder their cash through gambling venues – have seen a nosedive in Macau gambling revenues. Millions of dollars have also been wiped off the stock values of companies who have invested in Macau, such as the Las Vegas Sands Corporation and Wynn Resorts.

Recorded in History for all the Wrong Reasons

The 2015 APPT Nanjing Millions will now go down in history for all the wrong reasons – just eight months after the Beijing Millions broke records for the number of players to enter a live poker event outside of the United States.

On that occasion, APPT President Danny McDonagh commented that the turnout for the event had been beyond his wildest expectations, while co-host Jian Yang from Beijing´s AoBoTe Sports Culture-Transmitting Company described the event as a “miracle”.

Some observers have suggested that the APPT Nanjing Millions was cancelled by authorities who failed to extract bribe money from the organisers. In 2008, the Mexican leg of the Latin American Poker Tour (LAPT Nuevo Vallarta) was cancelled after local officials failed to get extra money out of PokerStars, so there is a precedent for such speculation.

Fortunately (for APPT organisers) no further stops in Mainland China are scheduled on the Asia Pacific Poker Tour during 2015.