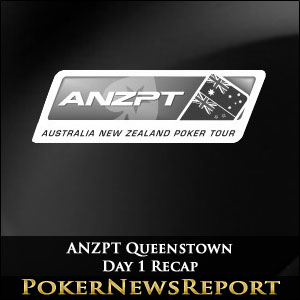 A total of 126 players turned out to the New Zealand resort town t take part in the Main Event, with 66 of them making the cut to the second day of play. Bryan Huang will have the chip lead going into Day 2, with a stack of 99,425 chips to his name.

Not far behind him is Day 1b’s chip leader Daniel Laidlaw. He ended the second starting flight with 85,900 chips, which is good enough for second on the chip ladder. Lukas Burns will go into the second day of play with the third highest stacks, with a total of 78,725, which puts him in good shape to go far in the next three days of the Main Event.

Huang has quite a lot of credentials going into this event; he made it to the final table of last year’s ANZPT Queenstown Main Event as well as the 2010 event. Huang will hope to go one better this year and keep his lead en route to winning the event.

He will have some stiff competition in the days ahead, however, with last year’s Main Event winner Dave Allan also having made it to the next phase of the tournament. Allan had a more modest stack after Day 1c, with 35,475 chips to his name. However, Allan’s experience and previous prowess at this event still makes him one to watch.

GuangDong Asia Millions Main Event runner-up Jeff Rossiter also made it to Day 2, with 17,250 chips. While he will likely one of the short stacks of the next phase, Rossiter’s credentials also mean he cannot be overlooked by other players at the event.

The prize pool for the Main Event was also released while Day 1c was taking place. It was revealed that the top 15 players of the tournament will be in the money, with the first place earning NZ$93,600 (around US$83,180).

Day 2a of the ANZPT Queenstown Main Event is set to take place tomorrow afternoon at the SKYCITY Queenstown Casino.