The PokerStars ANZPT Auckland currently being played at the SkyCity Casino has smashed the record for the highest attendance at a live poker game in New Zealand. 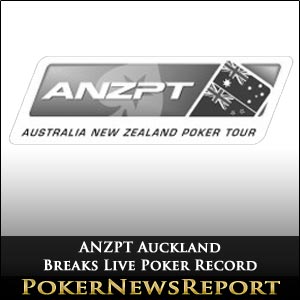 A total of 207 players paid the NZ$2,200 buy-in or qualified for the tournament via [geolink href=”https://www.pokernewsreport.com/pokerstars”]satellites hosted on PokerStars[/geolink] – smashing the previous record of 149 players who competed at the Queenstown Snowfest in July. To put this figure into perspective, if the tournament had been held in the UK and the same percentage of the population turned up to play in it, there would have been 2,880 players – the UK record for a live poker event stands at 1,625 (UKIPT Nottingham, April 2012).

Due to limitations on the space available at the “Nation´s Clubrooms” at the SkyCity Casino, the field was split into three opening day 1s. Only 26 of the 66 players who took their seats on Wednesday´s Day 1A managed to survive – with the chip leader, Angie Fitzgerald, bagging up an impressive 113,500 chips at the end of the day after quadrupling her starting stack within the first level.

Among those who also survived a fairly brutal four levels of play were the three players who chopped the ANZPT Melbourne Main Event – winner Paul Hockin (60,300 chips), second placed Ashley Warner (20,600 chips) and third place finisher Michael Guzzardi (98,000 chips), but it was not such good news for APPT Melbourne winner Leo Boxell who was one of those sent to the rail amidst the early carnage.

Closer at the Top on Day 1B

Thursday´s action was subdued in comparison to what had happened the night before. 55 more players joined the tournament, including recent APPT Melbourne champion Sam Razavi, APPT Sydney champion Aaron Benton and the reigning ANZ Player of the Year – Mishel Anunu. Unfortunately for the trio of champions, they only have the PokerStars Party to look forward to on Saturday rather than a Day 2 seat.

Charles Caris finished the day with the biggest stack of chips (108,900) courtesy of an AK > AJ duel with Jason Lee. Caris was very closely followed by Mark Wittkopf (108,600 chips) and Jie Gao (104,500 chips) – who crippled early pace-setter Richard Lancaster (A♠ 10♠) when coming from behind (with A♥ 9♥) to river a straight after Lancaster had paired his 10♠ on the flop.

A Scotsman´s Tale of Woe on Day 1C

Another 86 players joined the fray on Friday – the most unforgiving day of the three – with almost three-quarters of the players eliminated by the time the final cards where dealt. Scotland´s Stephen McKay epitomised the day´s action by rivering the K♥ to hit a set and bust Simon Watt´s A♣ A♠ and then taking the overall chip lead in the Main Event with the elimination of Luis Arrilucea.

However, McKay´s substantial chip stack lasted less than a level after he was coolered by XiaoDong Xia in a set over set hand which saw Xia leap to 170,000 chips. Xia finished the day with 180.600 chips – a substantial lead over the Day 1A and Day1B chip leaders – with Monica Eastman his nearest rival on 137,000 chips after flopping a set of Threes to best her opponent´s paired A♥ K♦.

When the eighty remaining players take their seats on Day 2 of the PokerStars sponsored ANZPT Auckland Main Event, blinds will be 200/400 with a 50 chip ante. The combined leaderboard after three days of action looks like this:-