Antonio Esfandiari’s victory at a $1 million buy-in event during the WSOP in Las Vegas this summer has allowed the pro to increase his wealth off the felt. 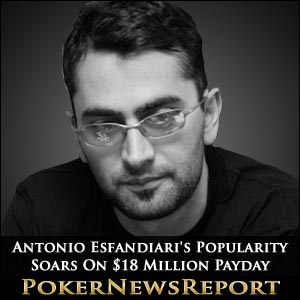 Antonio Esfandiari’s victory at a $1 million buy-in event during the WSOP in Las Vegas this summer has allowed the pro to increase his wealth off the felt.

By besting the field of 48 players and capturing the $18.3 million record prize as the champion of the Big One For One Drop tournament, “The Magician” has found himself in great demand and is scheduled to make an appearance on the Howard Stern Show to talk about poker with the controversial radio host.

I’m going to have a lot of fun with it, Esfandiari said, regarding his radio interview. Poker’s all-time money leader plans to do his part to show the game of poker in a positive way and “get out of the shadows” after the black eye caused by the Black Friday debacle nearly 1 and 1/2 years ago.

Esfandiari has never revealed how much of the $18.3 million he actually pocketed from winning poker’s richest tournament. Many of the pros who ponied up the $1 million entry fee sold action on themselves in order to participate. Industry observers are certain that Esfandiari did so as well, but The Magician is not revealing any of his secrets.

Esfandiari was born in Iran, but moved to San Jose, California with his family at the age of nine. He became a professional magician at the age of 19 and started taking poker seriously when invited to play Texas Hold’em. Now 33 years old, he has been interviewed by numerous radio shows and newspapers since his huge July payday. Esfandiari has also authored “The Magician’s Secrets for Winning Tournaments,” an instructional poker game for mobile users on Insta Poker.

The Magician has represented online poker sites in past sponsorship deals and will likely do so in the future based on the popularity attained by winning the world’s richest poker tournament. Esfandiari has won two World Series of Poker bracelets and the same number of World Poker Tour championships.