Antonio Esfandiari Works His Poker Magic for One Drop Victory

Esfandiari has become the richest man in poker history after bagging $18,346,673 for winning the $1 million Big One for One Drop at the World Series of Poker. 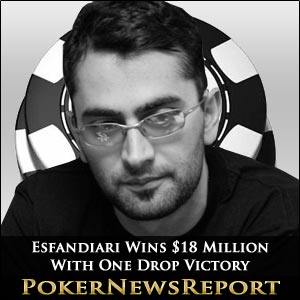 Antonio Esfandiari has become the richest man in poker history after bagging $18,346,673 for winning the $1 million Big One for One Drop at the World Series of Poker.

Known as ‘The Magician’, 33-year-old Esfandiari reckons his incredible victory in the No-Limit Hold’em event #55 at the Rio All-Suite Hotel & Casino in Las Vegas is better than sex, that’s for sure. That’s an understandable emotion for the Iranian to have, of course, especially after getting so unlucky just a few weeks back when finishing third in event #36.

Having left that $3,000 buy-in No-Limit Hold’em Shootout tournament severely disappointed after appearing certain for victory, the Vegas-based pro wanted to win even more – particularly as he got pretty unlucky when it was three-handed.

Champion Was ‘Determined’ To Succeed

In fact, Esfandiari was determined to come back and win another one – and that is, of course, what he did. And in some style, too, collecting a platinum bracelet, as well as the enormous cash prize.

Unusually, the final two players had started Day 3 of this amazing event as the chip leaders, with Esfandiari ultimately overcoming British pro Sam Trickett to pocket the largest ever prize in poker (not that he’ll have deep enough pockets for all that cash).

It did appear quite early on at the final table that it was likely to come down to these two players, however, as Esfandiari and Nottinghamshire’s Trickett battled it out for the top position while the six other Day 3 players played catch-up.

The match-up didn’t last too long, with Esfandiari emerging victorious after just 16 hands. Trickett initially made some inroads into Esfandiari’s massive lead, only for the latter to make trip nines on the day’s 81st hand that sent the Englishman crashing back down – and it was all over four hands later.

Esfandiari, on the button, raised to 1.8 million, while Trickett made the call to see a flop of J♦ 5♦ 5♣. Trickett then checked and Esfandiari bet, only for the English pro to retaliate with a check-raise to 5.4 million. Esfandiari then made a re-raise to 10 million and Trickett re-raised again to 15 million. However, Esfandiari shoved all-in and Trickett called for a showdown.

Trickett revealed Q♦ 6♦ for a flush draw, while Esfandiari showed 7♦ 5♠ for trip fives. The 3♥ turn kept Esfandiari ahead. The railbirds became eerily quiet at this point as everyone seemed to hold their breath awaiting the river card, with Esfandiari and Trickett both on their feet as the dealer produced the 2♥ to confirm the former as the champion of the richest tournament in poker history.

Time Was Right For ‘The Magician’

Esfandiari was certainly confident of success in this incredible event, stating that he had been visualizing his victory the whole time, although he did admit that is how he feels entering every tournament at the WSOP – the only difference being this time it just came true.

The champion added: I really saw it last night at the final table. I just felt it. I just knew it was my time. Indeed, it was, Antonio. Indeed, it was.

Malaysian businessman Richard Yong was the first player to exit on Day 3 in eighth place for $1,237,333, just 23 hands into the final table. Yong was all-in pre-flop while holding A♣ 2♥ against the K♠ J♥ of Denver’s Brain Rast. Yong stayed ahead through the flop and turn, but the river produced a king to give Rast the pot and knockout.

The English pro tanked again, then shoved all-in for 8,275,000. Rast snap-called, showing A♥ J♥ for a flopped flush, but was disappointed to see Trickett turn over 3♦ 3♣ for quads and the knockout.

Montreal’s Guy Laliberté – who put together this wonderful tournament – exited in fifth for $1,834,666 a short while later when his Q♦ Q♥ failed to hold against Esfandiari’s A♠ K♦ in a huge pot of more than 50 million chips.

The packed audience wouldn’t let this great man leave the event, however, without showing their appreciation for all his hard work and commitment to supplying the world with clean water, chanting: Guy! Guy! Guy! Guy! Guy! while giving him a well-deserved standing ovation.

Phil Hellmuth Out in Fourth

Wisconsin’s Phil Hellmuth was all-in with A♠ 10♠ against the A♥ Q♥ of Trickett. The A♣ 10♥ 5♥ flop gave Hellmuth the lead with two pair, but Trickett still had a flush draw. The K♦ turn made it even more interesting as jacks would also give Trickett the knockout. And, wouldn’t you know it, the J♣ came on the river to give Trickett a straight. While Hellmuth will be disappointed not to collect his 13th WSOP bracelet, this was easily the biggest score of his career.

Einhorn found himself as the short stack now and – having pledged all his winnings from this tournament to Boston-based education-focused non-profit organisation City Year – will certainly have brought smiles to many faces after taking third place.

Einhorn’s final hand saw his K♠ 9♣ lose out to Esfandiari’s K♣ 10♠ after the board came down 10♥ 9♦ 6♥ 3♥ Q♠. Then came the biggest poker battle of all time between Esfandiari and Trickett.