Superstar Antonio ‘The Magician’ Esfandiari is in a great position to defend his World Poker Tour (WPT) Five Diamond World Poker Classic crown after moving up to third on the chips leaderboard following Day 3 at The Bellagio in Las Vegas. 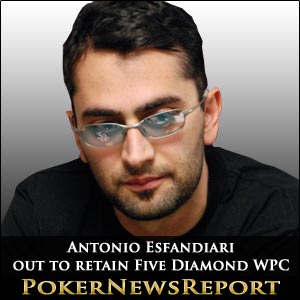 Superstar Antonio ‘The Magician’ Esfandiari is in a great position to defend his World Poker Tour (WPT) Five Diamond World Poker Classic crown after moving up to third on the chips leaderboard following Day 3 at The Bellagio in Las Vegas.

The one-time World Series of Poker (WSOP) bracelet winner was delighted with his performance on the day of his 33rd birthday, although, as he actually lifted the title on his 32nd birthday last year, he said: “It’s not been quite as good as last year.”

However, he added that, although he usually tries to “get the chips in early”, he also believes that he normally “knocks them off and is gone by dinner”, so decided this year that, “once I get the chips, I’m going to try to hold on to them”.

Esfandiari reckons this new approach “is working” and is “happy with the way it is going” so far – and that must be a major worry for all the remaining players in this massive poker tournament.

Just 49 players remain from the original starting field of 413, with each survivor guaranteed a minimum of $15,922, while the players who make the final table are assured of leaving Sin City with at least $119,418 from a prize pool that topped $4 million.

The champion will also pick up a WPT bracelet and a seat at the WPT Championship worth $25,000, along with the huge cash prize.

Julius took over at the top of the leaderboard by winning the penultimate hand of Day 3 against WPT champion Kevin Saul, with his set beating two pair, not long after play had reached level 16 with the blinds set at 3,000 and 6,000, as well as an ante of 500.

Andrew Robl, who was second to Esfandiari last year, was eliminated in 56th for $12,937, while the Iranian player knocked out another opponent late in the day to move up to third spot on the leaderboard.

Also missing out on Day 4 are players such as Eric Buchman, who was eliminated in 62nd place, Eric Baldwin (out in 63rd), Mike Meskin (out in 64th), Joshua Pollock (out in 66th) and Day 2 chip leader Grant Lang (out in 67th), with all those named here picking up $12,937 for their troubles.