Antonio Esfandiari in Pole Position for Big One Victory

Antonio Esfandiari is in the mood to pocket poker’s biggest ever prize after topping Day 2 of the $1 million Big One for One Drop event at the World Series of Poker. 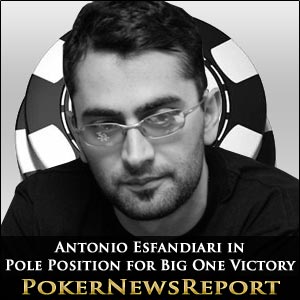 Antonio Esfandiari is in the mood to pocket poker’s biggest ever prize after topping Day 2 of the $1 million Big One for One Drop event at the World Series of Poker.

The 33-year-old Iranian Esfandiari – who now lives in Las Vegas – bagged up with 39,925,000 chips after the second day of the No-Limit Hold’em event #55 in the Amazon Room of the Rio All-Suite Hotel & Casino to hold a relatively small lead of British pro Sam Trickett (37 million).

Esfandiari is so thrilled at making the final table of this prestigious tournament that he confessed: It’s better than the first time I had sex! Indeed, Antonio.

Meanwhile, birthday boy Trickett – who celebrated turning 26 on Monday – reckons it is exhilarating to make the final eight, adding that, as he has been in this situation before – coming into a final table with a big stack, he feels comfortable and confident of success.

There’s a large drop-off before event organiser Guy Laliberté appears in third place on 21.7 million as the only other player to start Day 3 with above average chip stacks. The Canadian should be congratulated for getting this far, no matter what happens today, as his main aim throughout has been to raise cash and awareness for his charity.

Denver’s Brian Rast is way back on 11,350,000 in fourth place, but stated that making the final table was exactly what I wanted at the start of the tournament.

In fact, with California’s Mike Sexton hitting the rail in ninth place for $1,109,333, the first final table elimination occurred ahead of schedule as a thrilling Day 2 saw 29 more players exit – ensuring that the Day 3 starters are guaranteed at least $1,237,333.

The 47-year-old poker legend – who enters the final day in fifth place on 10,925,000 chips – believes the Day 2 bubble “was the scariest” he had “ever seen” as he has no intention of letting his friends – and three billionaires – down after they have invested so heavily in him.

Einhorn, meanwhile, will start Day 3 on 8,375,000 in sixth place, but has promised to donate all his winnings to charity – ensuring that many railbirds will be backing him at the final table.

Let’s return to the events of Day 2. Most spectators and commentators expected a long and hard day, but what we got was a fast and furious few hours. In fact, Californian venture capitalist Chamath Palihapitiya hit the rail after just one hand!

Palihapitiya shoved all-in while holding K♣ 10♠ and was called by Minnesota’s John Morgan – the chief executive officer of Winmark Corporation – who showed A♠ Q♣. The Q♥ J♦ 10♣ 8♥ 3♦ board did not provide enough help to Palihapitiya, who made his exit.

Vegas-based pro Vivek Rajkumar was next to leave, before a massive hand saw Tom ‘durrrr’ Dwan and Daniel Negreanu hit the rail. Russian businessman and poker player Mikhail Smirnov was the beneficiary from the three-player pot as New Jersey’s Dwan showed A♦ A♠, Canadian star Negreanu revealed A♥ 10♦ and Smirnov tabled 9♠ 9♣.

The flop came 9♥ 7♦ 4♥ to give the Muscovite trip nines for the lead, while the 8♥ left Negreanu drawing dead and Dwan needing an ace. However, the river was the 9♦ as Smirnov made quads to send both his opponents to the rail.

Phil Ivey Out in 26th

New Jersey’s Tom Marchese then busted Oklahoma’s Ben Lamb in 25th to leave the tournament spread out over three tables. Marchese was the chip leader at this point, while Esfandiari was in second and Rast in third.

This momentous hand saw Esfandiari knock Hollywood’s Jason Mercier out in 20th place after the latter seven-bet shoved all-in with K♥ K♠, only to run into former’s A♦ A♣. Unsurprisingly, Esfandiari zoomed to the top of the leaderboard with this massive pot.

Esfandiari was still chip leader, while Russian Ilya Bulychev was the short stack as the most important bubble in poker arrived. It took only a few hands of 10-handed play before Bulychev had all his chips in the middle, to be called by Nottinghamshire’s Trickett during level 18, with the blinds at 150,000/300,000 and a 50,000 ante.

Mike Sexton is First to Cash

Then, with just over 15 minutes left during level 18, Sexton fell in ninth place. His final hand arrived when Esfandiari raised it to 900,000 pre-flop and big blind Sexton made the call. The A♠ J♠ 3♦ flop saw both check to see the 6♦ on the turn, prompting Esfandiari to bet 1,150,000. Sexton then shoved all-in and Esfandiari made the call.

However, there was some confusion as the dealer believed that Esfandiari had folded so placed his cards face down on the muck pile. Esfandiari immediately jumped up and the floor manager corrected the dealer, placing the pro’s 6♠ 3♣ on the table. Esfandiari had two pair, while Sexton revealed J♦ 10♦ for a pair of jacks and a flush draw. However, the 8♣ river was no good to Sexton, who exited in ninth place.