Antonio Esfandiari is in a good position to lift his second WSOP bracelet in Las Vegas as he ended day 2 of the $1,000 No-Limit Hold’em event in fourth place. 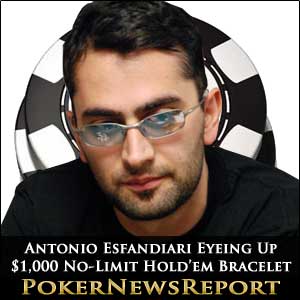 Iranian-born American star Antonio Esfandiari is in a good position to lift his second World Series of Poker (WSOP) bracelet in Las Vegas as he ended day two of the $1,000 No-Limit Hold’em event #45 in fourth place.

While Esfandiari enjoyed a good second day, 11-time bracelet winner Phil Hellmuth failed to build on his patience as he crashed out in 28th place for $10.560.

The Poker Brat worked his short stack hard to eventually win a big pot with pocket aces – and thereafter built up a healthy stack to appear certain to go deep with a third final-table appearance at this year’s WSOP.

However, the 46-year-old’s cards went dead at exactly the wrong time to the day’s ultimate chip leader, Driscoll.

Hellmuth, in early position, limped in and Driscoll checked from the big blind. The flop showed Qd-Ad-4s with Hellmuth checking. But Driscoll bet 10,000, only for the poker superstar to raise to 20,000. Undeterred, Driscoll put in a 30,000 re-raise and Hellmuth went all-in.

Driscoll called to show Ac-10s, while Hellmuth revealed Kd-8d. The turn came As and the river showed Qs to send Hellmuth out.

The unfortunate and unhappy Hellmuth stood up and swiftly left the Amazon Room, leaving all his belongings behind.

He did, however, return to shake Driscoll by hand, but still rebuked him for what he considered poor play. Driscoll, in turn, questioned why Hellmuth would do such a thing, to which Hellmuth replied: “It’s not you – I’m just steaming right now. I just played perfect for two straight days and lost it all.”

With Hellmuth out – as well as other big-name pros such as Andrew Lichtenberger (52nd), Lee Childs (130th) and Joe Tehan (103rd) – Esfandiari, ‘The Magician’, steadily climbed the leaderboard and will aim to underline his standing as one of the world’s best players in the Amazon Room tonight.