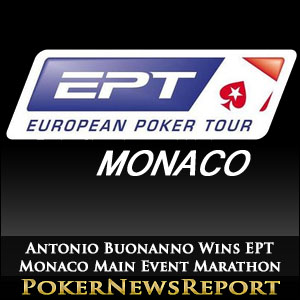 The battle between Buonanno and Salter had been engrossing throughout the day, and had started as early as the first orbit of the button when Buonanno doubled-up against Salter 8♠ 8♦ > A♣ 4♣ to rob the UK poker player of the chip lead.

Salter and Buonanno Flip-Flop at the Top

Jack Salter regained the advantage a few hands later after eliminating Sebastian Bredthauer in eighth place A♣ K♦ > A♥ 8♥, but Antonio Buonanno leap-frogged up to the top of the leaderboard by busting out Kenny Hicks in seventh place 10♣ 10♦ > A♣ K♦.

A few hands later, and Jack Salter was down to third place when Mayu Roca bust out Sebastian von Toperczer in sixth place 10♥ 10♠ > 7♥ 7♣, but Salter took a 4 million chip pot against Buonanno with a five-bet pre-flop shove to once again lead the EPT Monaco Main Event final table.

Jack Salter was gaining few friends with the time he was taking with his betting decisions, and the animosity between Salter and Buonanno increased when Salter (A♠ 8♣) took another big pot from the Italian (A♥ 10♣) with a runner-runner flush.

Magnus Karlsson was then eliminated in fifth place when he moved all-in with 3♠ 3♣ and received two calls from Malte Moennig (8♦ 8♠) and Mayu Roca (9♥ 9♠). Roca had the chance to bust out his two opponents; but the 8♣ on the flop gave Moennig a set, enabled him to almost triple up, bust Karlsson and leave Mayu as the short stack.

Salter Makes an Off-Table Deal after Roca and Moennig Bust

Salter and Buonanno continued to take hands from each other – with Salter always remaining ahead of his opponents – and he had more than half the chips in play after eliminating Mayu Roca in fourth place Q♣ Q♥ > 5♣ 5♦. The three remaining players then tried to negotiate a deal, but Jack Salter was not prepared to give Antonio Buonanno and Malte Moennig the extra they wanted, and play continued.

Malte Moennig was eliminated three hands later, when both his A♦ 5♦ and Antonio Buonanno´s A♠ K♦ failed to connect with the board; after which further deal negotiations took place – but between Jack Salter and Ami Barer, who took three-quarters of the difference between first and second placed prize money to give Salter a win-win scenario and Buonanno needing to win the event if he was to take more than second placed prize money.

Jack Salter took a 10.8 million -v- 8.7 million chip advantage into the heads-up against Antonio Buonanno, and – over the first thirty hands of the heads-up – the advantage increased only slightly, and mostly due to one particular hand when Salter (Q♦ 3♦) flopped a pair of Queens against Buonanno´s pocket Deuces.

A further level passed without any significant action, although Salter caught Buonanno bluffing a couple of times to extend his chip advantage to 14.1 million -v- 5.4 million chips. Pressure from Salter reduced Buonanno´s chip stack to below 3 million chips, but a fortunate double up K♣ 2♣ > A♥ 9♦ kept the Italian in the game.

By hand 227, the heads-up was now officially the longest in EPT history and another unlikely Buonanno double (K♦ J♥ > A♥ J♦) brought the respective chip counts back to where they were four hours previously. Another double up (10♥ 10♠ > A♥ K♣) gave Buonanno the lead for the first time during the heads-up climax to the EPT Monaco Main Event, and thereafter it all went downhill – albeit slowly – for Jack Salter.

Antonio Buonanno extended his lead when rivering two pairs against Salter´s missed flush draw, but the time Jack Salter was taking to respond to Buonanno´s betting actions were clearly winding the Italian up, and he was regularly asking for the clock to be called. One hand lasted in excess of ten minutes as Salter deliberated over Buonanno´s post-River shove, with the clock eventually running out and Salter forced to fold his cards to give the 2.4 million chip pot to the Italian.

The concluding hand of the EPT Monaco Main Event occurred when Jack Salter responded to Antonio Buonanno´s min-raise from the button by announcing he was all-in for his last 4.95 million chips. Buonanno quickly called and the cards were on their backs:

The flop of J♥ 9♠ 2♥ missed both players, but the Q♦ on the Turn left Jack Salter additional outs to a gutshot straight if a Ten were to appear on the River. To Antonio Buonanno´s relief, the 3♠ blanked for both players and the Italian had scooped the €1,240,000 first prize and become the latest EPT Champion.