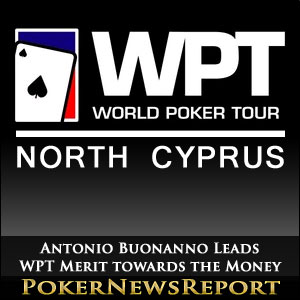 Day 2 of the PartyPoker WPT Merit Classic saw the returning field of 180 players plus 29 late re-entries reduced to just 79 over five levels of action. Chip leader at the start of play was the runner-up in this event last year – Albert Daher – who was looking to finish one spot better than when failing to overcome a massive chip deficit again 2013 winner Alexey Rybin.

Daher survived the day – eliminating Igor Dubinskyy (K♦ 6♦ > K♥ Q♠) and Yotem Bar Yosef (A♠ A♥ > 6♥ 6♦) on the way – but he suffered a big hit to his chip stack during the last level of play, when Alexander Lakhov´s pocket Fives hit the 5♠ on the River to complete a Full House, and Daher finished some way behind the chip leader with 261,500 chips.

Big Names Tumble throughout the Day

Day 2 saw several big guns hit the rail – among them former WPT Champions Dominik Nitsche, James Dempsey and Alexey Rybin. Ilan Boujenah let a contentious floor decision upset him, then he had his Aces cracked and bust out of the tournament in a furious mood. He was joined on the rail during the day by Manig Loeser, Luca Moschitta and EPT Copenhagen winner Mickey Petersen.

However, possibly the unluckiest player of the day was Harprit “Rana” Gurnam. Gurnam was eliminated during Level 14 (blinds 1,200/2,400 – ante 400) when moving all-in with his last 20,000 chips with 7♥ 7♠. Sam Trickett made the call with A♣ J♦ and the two players saw the flop of A♠ K♠ 7♣. What happened next was remarkable. A third Ace (A♥) appeared on the Turn – giving Trickett trip Aces, but Gurnam a Full House – before the fourth Ace (A♦) was dealt on the Turn – giving Trickett Quads and sending Gurnam to the rail with a sensational bad beat story.

With the 29 late re-entries, the total field for the $4,400 buy-in PartyPoker WPT Merit Classic Main Event hit 404 – the largest field assembled for a WPT Cyprus event. The top forty-five players will cash in the event (a min-cash is worth $8,500) while the winner will pick up $325,400 including a seat in the WPT World Championship at the Borgata Casino next spring.

Chip Counts at the End of Day 2