An economics student from the Czech Republic leads the way in the EPT Barcelona as the bubble bursts and only 61 players remain in the Main Event. 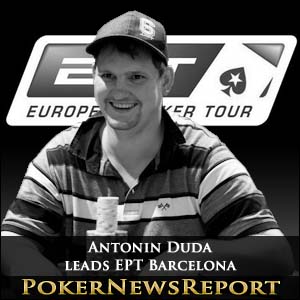 An economics student from the Czech Republic leads the way in the EPT Barcelona as the bubble bursts and only 61 players remain in the Main Event.

Antonin Duda, who had started Day 3 of the EPT Barcelona Main Event with a below average 144,100 chips, fought his way through some tough competition to take the chip lead in the feature event with three days left to go – busting out Day 1B chip leader Guy Bachar on the way and, at one point, having nearly 2 million chips in front of him.

Starting on a table which included the experienced American Nicholas Augustino, German Kai Herold, Russian Andrei Nikonov and Denmark´s Morten Mortenson, Duda got off to a strong start – forcing Augustino out of a valuable pot at the start of proceedings and then eliminating Kai Herold, who popped his last 72,000 chips into the pot from the big blind with K♠ 10♣ against Duda´s 7♦ 7♠ (which held), chipping Duda up to 500,000.

As the tables broke, Duda found himself on the same table as Guy Bachar, who tried to show his strength by six-betting the Czech all-in on one of their first encounters. Duda called to reveal K♥ K♦, while Bachar´s 8♣ 7♠ had little hope of success on a board which ran 5♣ J♥ 2♠. Duda relieved Bachar of the remainder of his chips when his 10♦ 9♦ caught trip Nines on the flop against Bachar´s A♣ J♥, and all of a sudden the economics student was staring at a chip stack of 1.7 million.

Although Duda redistributed some of those chips before the close of play, he completed Day 3 of the EPT Barcelona Main Event with 1.47 million chips, 15 big blinds ahead of Spaniard Samuel Rodriguez, with a gap back to Finn Ilari Ziigmund Sahamies – the only other player to finish the day with more than one million chips. Fascinatingly, Duda and Sahamies have been drawn on the same table for the start of Day 4, which will start on Level 19 (Blinds 4,000 / 8,000 – ante 1,000) and play through until just 24 players remain.

Of the ten players at the top of the leaderboard, two are female players – Fatima Moreira de Melo, who is a PokerStars Team Sports Star having previously played hockey for the Netherlands, and Lucille Cailly who finished second in the EPT Monte Carlo Grand Final last year. Further down the list, Lock Poker sponsored Leo Margets has half the average chip stack (250,000 chips), while supporters of the lady´s game will also be please to see that Xuan Liu, Ana Marquez and Isabel Baltazar also got into the money before their luck ran out.