Anton Wigg topped the leaderboard on 695,000 after Day 2 of the main event drew to a close at the PokerStars European Poker Tour (EPT) Berlin. 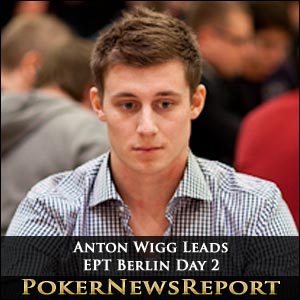 Swedish poker star Anton Wigg topped the chips leaderboard on 695,000 after Day 2 of the €5,000+€300 buy-in main event drew to a close at the PokerStars European Poker Tour (EPT) Berlin.

Six levels of play were completed in the Grand Hyatt Hotel, with Stockholm’s Anton Wigg – a former EPT champion from 2010 – topping the chips count, just 24,500 ahead of second placed Russian and Day 1a chip leader Vladimir Geshkenbein (670,500), as the money bubble was burst.

The leading 112 places make the money, so, with just 102 players from yesterday’s starting 329 surviving to begin Day 3, Scotsman David Vamplew – the EPT London main event champion from 2010 – was the left as the unfortunate money bubble boy after he crashed out in 113th.

German Mario Puccini is sitting in third place on 604,000 chips, while Englishman Marc Wright holds fourth on 585,000 and Greek player Andreas Vlachos is fifth on 531,500.

Wigg – who picked up $672,818 for taking down the EPT Copenhagen DKR35,000 No-Limit Hold’em main event back in February of 2010 during season six of the tour – is in pole position to lift the biggest prize of his live poker tournament career if he can stay in front to collect the €825,000 on offer in Berlin.

In fact, the 25-year-old Swede has already enjoyed a profitable Berlin stay after picking up €37,250 for winning the €2,000 buy-in No-Limit Hold’em Turbo Bounty event on Tuesday evening.

Now, having started the second day of the main event with 152,200 chips, he added another 542,800 to his stack when clearing all the hurdles placed in front of him – including a few massive hands against Germany’s Davidi Kitai and American PokerStars qualifier Calvin Anderson.

The first of these pivotal hands came against Oklahoma’s Anderson – who finished in 14th place for $115,000 at last year’s PokerStars Caribbean Adventure (PCA) $10,000 buy-in No-Limit Hold’em main event – when Wigg eliminated the American.

Andersen opened from early position, only for another player to three-bet before Wigg then placed in a four-bet. But the States pro decided to five-bet shove while holding Q♣ Q♠ – but then saw Wigg, who was not to be dissuaded from seeing a flop, quickly call to show the dominating K♥ K♦ after the third player had folded.

Small blind Kitai then four-bet to 45,000 after the action had folded to him, ensuring that the big blind and Albertini also mucked their cards to leave just Wigg to make the call.

Much to Kitai’s frustration, Wigg only revealed the 5♣ while allowing a wry smile to cross his face as he collected the chips that took him up to 615,000.

The 23-year-old managed to make quads at one point, overcame trips while holding a straight, and also saw his kings hold up during a huge three-player all-in hand against jacks and ace-queen.

However, it wasn’t such a great day for Fife’s Vamplew – who collected $1,408,407 for taking down season seven’s EPT London £5,000 buy-in main event – as the Scot just missed out on cashing in Germany’s capital city when his pocket kings were cracked by the queens of PokerStars qualifier Heinz Kamutzki.

The German, in early position, raised pre-flop and then called when big blind Vamplew three-bet shoved all-in for 61,500. Kamutzki showed Q♣ Q♦, while the Scotsman tabled K♦ K♥ to be well ahead – only for the Q♠ 8♠ 4♦ flop to give the German trips.

The A♣ turn was no good to Vamplew, while the 10♣ river confirmed his exit as Pennsylvania’s Bill Chen became the first casher in 112th place for $7,500. Chen was soon joined by several other casualties, including Canadian Jeff Sarwer in 107th for the same cash prize.