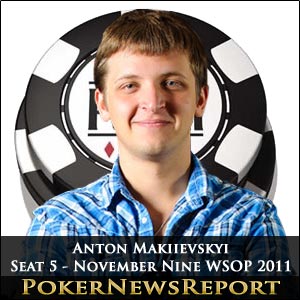 Anton Makiievskyi´s youth makes him the player at the final table of the [geolink href=”https://www.pokernewsreport.com/2011-wsop-november-nine”]WSOP November Nine[/geolink] Main Event about who the least is known.

Coming from Dnipropetrousk in the Ukraine, the 21 year old student will be the youngest ever winner of the World Series of Poker Main Event should he prevail next weekend at the tournament climax.

Because of his age, he has no WSOP pedigree, but has been supported throughout the tournament to date by his close friend Oleksii Kovalchuk who took down the WSOP 6-Max NLHE bracelet in July.

How Anton Reached the Final Table

Anton entered Day 8 of the WSOP Main Event as the chip leader thanks to a massive 20 million chip pot against Chris Moore (A♥ J♦), when coming from behind with K♦ J♣ and hitting a flop of K♠ J♣ J♥. Moore limped into Day 8, but was eliminated by Anton, who then went on to increase his chip stack to over 33 million courtesy of some aggressive betting and a major three-way pot against Andrey Pateychuk (recent winner of the EPT San Remo) and Ryan Lenaghan. Unfortunately, Anton´s aggressive betting also proved to be his downfall, and he slumped by the end of the day to 13,825,000 chips and enters the final table in eighth.

What´s Anton Been Doing Since?

Anton also went on the European Tour to London and Cannes, and managed a minor cash in the WSOPE shootout event. He also recently signed a sponsorship deal with [geolink href=”https://www.pokernewsreport.com/888-poker”]888 Poker[/geolink] which will keep him busy on the online poker tables in the next few months as the Eastern European live season draws to a close. His other aim, following his appearance at the WSOP Main Event is to qualify for the [geolink href=”https://www.pokernewsreport.com/pokerstars”]PokerStars[/geolink] Caribbean Adventure, where he earned a modest $17,500 for his 170th place finish in 2008.