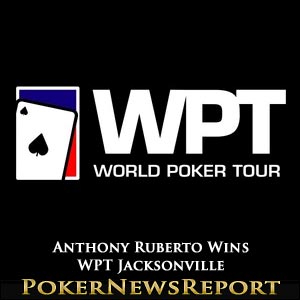 Anthony Ruberto outlasted 392 other players to record his biggest career victory with success in the Orange Park Kennel Club, which sits south of Jacksonville.

With a prize pool of $1,277,250, the biggest ever recorded in North Florida, the Floridian was joined at the final table by the likes of another WPT finalist in Darryll Fish – also from Florida – and Hawaii’s Lisa Hamilton, who collected $195,390 for lifting the 2009 World Series of Poker (WSOP) $1,000 Ladies No-Limit Hold’em World Championship.

Soverel showed K♥ 7♥ while Ruberto made the call when holding K♣ J♥ to ensure that the Floridian was way ahead.

A Q♣ J♠ 10♣ arrived to give Ruberto a pair of jacks, although straight draw possibilities were open to both players.

The turn was the 5♦, which changed nothing, while the 7♦ on the river ensured Ruberto of his biggest pay day.

The young professional had started the final table in control after arriving with over two million more chips than his nearest rival – and he was to make that advantage count.

First out at the final table was short stack Fish. He doubled-up early on, but then met his match in Hamilton.

The Floridian was all-in with 3♣ 3♦, only for Hamilton’s 7♣ 7♠ to hold, leaving Fish with $46,315 in sixth place – the same position he filled at Season Nine’s LA Poker Classic at The Commerce.

Online qualifier Artie Rodriguez was next to hit the rail. His lack of live experience eventually showed as he called with A♣ J♣ to be met by Soverel’s A♠ Q♦. His chip stack was demolished and Rodriguez was out just two hands later in fifth place with $55,077.

Soverel’s double-up tied him for second place alongside Vitor Coelho and Hamilton as all three chased Ruberto.

With just four players remaining, play became much tighter as 50-plus hands passed without any further eliminations. In fact, it became so tight that there was essentially a four-way tie at one point as all players took turns as chip leader.

However, not long after, Coelho and were seriously short of chips. The Tampa native, who held only 20 big blinds, moved all-in while holding 4♣ 4, but ran into the A♦ A♥ of Ruberto.

Coelho couldn’t beat that and was out in fourth for $75,105 as Ruberto again moved atop the chip leaderboard.

This lead became larger not long after when he and Hamilton became embroiled in a massive post-flop pot.

The flop showed A♠ 9♠ 2♦ and Hamilton, in the big blind, checked before Ruberto made a continuation bet. She called then check-raised, only for Ruberto to go all-in.

Hamilton quietly considered her options before calling with A♥ 3♦ for a pair of aces. However, Ruberto also had a pair of aces and a better kicker with his A♦ K♣.

The turn and river failed to improve Hamilton’s hand and she was out in third for $112,657, while Ruberto had accumulated a stack that dominated heads-up rival Soverel by about 4 to 1.

Soverel closed the gulf early on in their clash when doubling-up with his Q♠ Q♦ against the A♣ 8♥ of Ruberto.

However, it was all over not long after and Ruberto became the latest WPT champion.