Anthony Hachem came from seventh to first on the final table to win the ANZPT Melbourne Repechage Main Event – the penultimate event of the ANZPT Season. 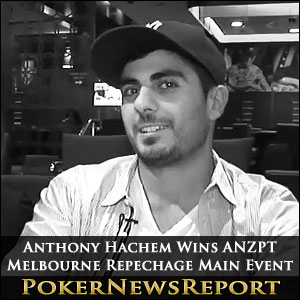 Anthony Hachem came from seventh to first on the final table to win the ANZPT Melbourne Repechage Main Event – the penultimate event of the ANZPT Season.

The ‘Repechage’ is a new event on the Australia and New Zealand Poker Tour and – like the UKIPT ‘Series’ at the Hippodrome in London – has much lower buy-ins than the ‘regular’ Main Events. This first repechage, hosted at the Crown Casino in Melbourne, attracted 844 players who either qualified online at PokerStars, through one of the many live satellites at the casino or who paid the Au$1,100 buy-in in pursuit of a share in the Au$750,000 guaranteed prize pool.

Four of the final nine players were sent to the rail within the first hour of play – with Anthony Hachem being the major beneficiary. Ian Thomson was the first player to depart after Hachem (9♦ 9♠) had check-shoved his bottom set of Nines into Thompson´s paired K♠, and then Thompson was unlucky to give the rest of his chips to Iori Yogo in the next hand (A♦ J♦ < J♣ 10♥) when Yogo completed his straight draw on the Turn.

Shortly after, Iori Yogo moved into the chip lead with the elimination of Dean Francis in eighth (A♥ K♣ > Q♥ Q♠), but Anthony Hachem was becoming increasingly active and sent Tony Kondevski to the rail in seventh when his A♣ Q♠ was too strong for Kondevski´s A♥ 7♣. Daniel Neilson now became the short-stack, but his seat at the table was soon to become vacant when all his chips went in pre-flop with J♣ 10♣ and failed to improve against Michael Bouskila´s K♥ Q♣.

Hachem Chips Up as Kanaan and Craib Hit the Rail

A two-hour period of tense play followed after the quick-fire start to the final table, but the climax of the ANZPT Melbourne Repechage Main Event was again to erupt when the two overnight chip leaders were eliminated from the tournament in quick succession.

Michael Kanaan (A♠ 10♠) was unlucky to bust in fifth when Anthony Hachem (A♦ 5♥) hit the 5♣ on the River, but Fabian Craib should have known better to chance the last of his chips with A♦ Q♥ and failed to connect with the board against Hachem´s 8♠ 8♦.

With Hachem building up a significant chip lead, Michael Bouskila felt it was time to act, but chose the wrong moment to push his final 2.5 million chips into the middle with A♠ 5♥ and was eliminated in third by Iori Yogo who was happy to make the call with A♣ 7♣.

Despite taking a 2:1 chip advantage into the heads-up, it took Anthony Hachem more than an hour to get the better of Iori Yogo. In the final hand of the event, Yogo (K♣ 9♠) moved all-in with his last 3 million chips and was called by Hachem who was holding A♥ Q♠.