Another Study Shows Poker to be a Game of Skill

A joint study by the University of Nottingham, the Erasmus University Rotterdam and VU University in Amsterdam shows yet again that poker is a game of skill. 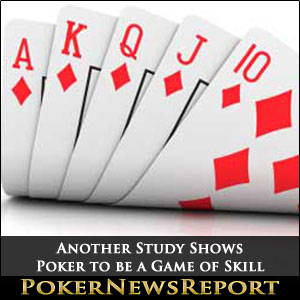 A joint study by the University of Nottingham, the Erasmus University Rotterdam and VU University in Amsterdam shows yet again that poker is a game of skill.

In recent years there has been no lack of studies supporting the argument that poker is a game of skill. In 2008, researchers at the Case Western Reserve University in Cleveland published the results of a relatively small study in which they concluded that “Poker is a Skill”. The following year, Citigal – a software consulting firm – analysed more than 100 million hands played on PokerStars and determined that skill dominated luck.

Also in 2009, Ingo Fiedler and Jan-Philipp Rock from the University of Hamburg’s Institute of Law and Economics published “Quantifying Skill in Games – Theory and Empirical Evidence for Poker” (subscription required) – a study that examined the results of more than 50,000 online players before providing strong support to the theory that poker is a game of skill.

“The Role of Skill Versus Luck in Poker” was published in 2011 – again demonstrating that skill was the dominant factor for profitable players and based on evidence from the previous year´s World Series of Poker. This was followed in 2012 by the most extensive study into the skill vs. luck argument – Robert Hannum´s “Economics of Poker: The Effect of Systematic Change” (subscription required) – which concluded “Clearly the driving force behind the economic outcome of Texas Hold’em is skill rather than chance.”

The results of the latest research into the skill vs. luck argument were announced this week on the University of Nottingham´s blog page. After having examined 456 million betting actions from a year´s worth of online data, researchers concluded that skilled players will consistently outperform less skilled players if enough hands are played.

The study showed that although more skilful players fared slightly better over a small sample of hands, once the sample reached 1,471 hands, the more skilful players were better off more than 75% of the time – confirming Fiedler and Rock´s analysis from 2009, who placed the definitive number of hands at 1,500.

Research co-author – Dr Dennie van Dolder – said: Our findings could have significant legal implications. The key question isn’t whether skill is a factor but rather whether it dominates chance. If it does then poker must be considered a game of skill. He added, If performance is predictable, as we found, then it follows that poker involves an element of skill and can’t be merely a game of pure chance.

Dr Dolder said that the findings of his research represented both good and bad news for poker players. The good news Dr Dolder said, is that [poker players] will have the satisfaction of knowing the game they love is recognised as requiring real skill – a factor that would impact jurisdictions in which gambling is prohibited, but betting on games of skill is allowed.

The bad news – according to Dr Dolder – is that, if the policymaking community acknowledge the results of the University´s research, skilful players may have to start handing over a portion of their winnings to the taxman – a comment directed towards poker players who are currently not taxed on their income from live or online poker (*).

(*) Poker players from Austria, Belgium, Bulgaria, Czech Republic, Denmark, Germany, Hungary, Italy, Luxembourg, Malta, Romania, Sweden and the UK currently do not have to pay tax on winnings from poker. Dutch players are currently taxed at 29% on net winnings above €454.00, in France 12% is deducted from winnings in live casinos only, and in Spain net winnings from poker are considered to be personal income and taxed at rates from 20% to 61%.

The moral of this story is do not move to Spain if you are a skilful poker player!