Another Chance to Fire on Party´s Quick Fire Leaderboards

This coming weekend, Sit & Go players have another chance to add thousands of dollars to their bankrolls in Party Poker´s Quick Fire Leaderboards promotion. 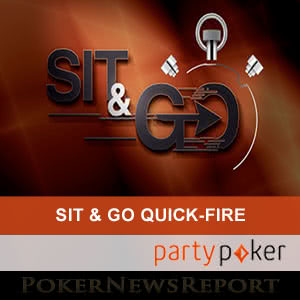 This coming weekend, Sit & Go players have another chance to add thousands of dollars to their bankrolls in Party Poker´s Quick Fire Leaderboards promotion.

Party Poker´s Sit & Go Quick Fire Leaderboards promotion was launched a couple of weeks ago but, due to so much else going on at the site, the promotion has been largely overlooked. However, with more than $50,000 in cash prizes and tournament entry tickets up for grabs – plus the opportunity to win a $10,000 package to the Caribbean Poker Party – this is a promotion well worth checking out.

The promotion runs from 4:00pm this coming Friday (all times Central European Time) until midnight on Sunday; during which time Party Poker will be running fourteen leaderboard competitions in consecutive four-hour blocks. Each leaderboard competition has three buy-in levels, so players of all bankroll levels have the chance to fire in the Party Poker Quick Fire Leaderboards promotion.

How the Promotion Works in More Detail

During each four-hour period, players will be awarded points for competing in “standard” Sit & Go games at Party Poker (everything except heads up, Sit & Go Hero, and Hero Special Edition). The value of the points depends on the number of players in each game, the buy-in and each player´s finishing position. In “Double or Nothing” Sit & Go games, players are ranked according to their final chip stack.

At the end of each four-hour period, the top five players on each leaderboard will win a cash prize. The players who finish in the top ten positions on each leaderboard will be entered into a draw to win tournament tickets, and any player who has competed in twelve or more qualifying Sit & Go games between Friday and Sunday will be entered into a free draw for a package to the Caribbean Poker Party.

No matter what level of buy-in you are playing at, the cash prizes are well worth aiming for. However, please note, as the promotion runs continuously over the weekend, the cash prizes and tournament entry tickets will not be awarded until Monday at the earliest. Please also note leaderboard points are awarded according to the start time of each Sit & Go game, rather than when it ends.

The draw for the $10,000 Caribbean Poker Party package will also take place on Monday and the winner will be notified by email within 72 hours. The winner of the draw will have the option of selling their package only if they have already qualified for the Caribbean Poker Party via another promotion or via a satellite tournament. There is no cash alternative prize available.

Will You Fire at Party Poker This Weekend?

The Sit & Go Quick Fire Leaderboard promotion is open to every player with a real money account at Party Poker. There is no requirement to opt into the promotion, as leaderboard points will be awarded automatically and added to each leaderboard in real time. You can monitor your progress – and the progress of your opponents – via the “What´s Going On” page of the Party Poker website.

If you do not yet have a real money account at Party Poker, check out [geolink href=”https://www.pokernewsreport.com/partypoker”]our Party Poker review[/geolink] for multiple reasons why you should be playing at the site. If you subsequently fancy taking on the Sit & Go regulars for a share of the cash prizes up for grabs this weekend, you should also take a look at our [geolink href=”https://www.pokernewsreport.com/party-poker-bonus-code”>bonus code page[/geolink] to see how you can benefit from an exclusive 100% match on your first deposit up to $500.