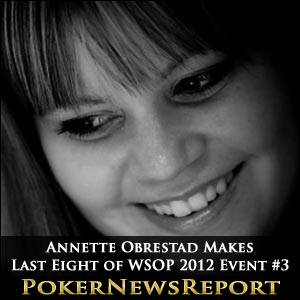 Having started Day 2 with 64 survivors from the original 317-player field, Lock Pro Elite member Annette Obrestad will be joined by Jason Koon, Andy Frankenberger, Leif Force, Simeon Naydenov, David Benefield, Julian Powell and Gregg Merkow in the quarter-finals after all made it through another three rounds of action.

All eight will again need to win three matches in the Amazon Room of the Rio All-Suite Hotel & Casino to pick up the $207,708 winner’s cheque and a much-desired gold bracelet, although all are guaranteed at least $28,409 if losing their last-eight clashes.

The trio of Las Vegas’ Koon, Force, of Tallahassee, and Texan Benefield are well known in the poker world but have still to collect a WSOP bracelet, so will no doubt be going all out to pick up the biggest share of the $870,870 prize pool later today.

The 23-year-old European will certainly be hard to beat as she will be determined to improve on her performance at last year’s poker festival, when she failed to cash from the 15 events entered.

Benefield was the last player to advance, but Koon’s elimination of Georgia’s Josh Arieh was probably the most spectacular as the latter got extremely unlucky in two huge pots when exiting.

The second of those big pots proved fatal for Arieh, who had three-bet all-in while holding J♣ J♦ after Koon had originally raised from the button. Koon made the call to show A♠ J♠ and find himself well behind pre-flop. The 8♦ 10♦ 2♦ flop ensured that Arieh stayed, while also giving him a diamond flush draw. The 10♥ changed nothing, but the A♥ spiked on the river to send Arieh out in the cruelest of fashions.

The veteran Sexton immediately hurried over to event #4, the $1,500 buy-in Seven-Card Stud Hi-Low 8 or Better tournament, as hand-for-hand play was starting as the money bubble approached.

The 64-year-old Poker Hall of Famer made it past the bubble to secure his second cash of the festival, making him the first player to achieve that feat this year. The Indiana native sits in 17th place in that event and is guaranteed at least $5,416 after the field was cut down to just 23 survivors.

Sexton had, of course, already earned $9,644 for exiting in 16th place in event #3, but will surely be aiming to improve on that later today when he returns for event #4.