Annette Obrestad is the only woman left in the $3,000 buy-in Heads-up No-Limit Hold’em/Pot-Limit Omaha mix event at the World Series of Poker (WSOP). 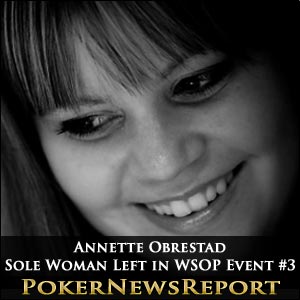 Annette Obrestad is the only woman left in the $3,000 buy-in Heads-up No-Limit Hold’em/Pot-Limit Omaha mix event at the World Series of Poker (WSOP) in Las Vegas.

A total of 317 players paid the entry fee for event #3, but only 64 remain following three rounds in the first staging of this tournament at the WSOP – with all survivors guaranteed at least $3,395 from the prize pool of $870,870.

Day 2 will feature three more rounds in the Amazon Room of the Rio All-Suite Hotel & Casino that will end when 16 players remain, with all aiming to bag the $870,870 top prize.

Norwegian Obrestad – a Lock Pro Elite member – might be the only female still left in the tournament, but the 23-year-old will be once again aiming to outlast some of the best players in the world today, including the likes of David Chiu, Josh Arieh, Sam Stein, Jason Koon, Andy Frankenberger, Mike Sexton, John Racener, Victor Ramdin, David Benefield, David Williams, Justin Bonomo, Eric Froehlich, Guillaume Darcourt and Yevgeniy Timoshenko.

Play on Day 1 came to a close when Ukrainian Timoshenko defeated California’s Zach Clark, when the blinds had reached a point – 2,000 and 4,000 in level 9 – that both players were almost forced into moving all-in from the button whenever being dealt a half-decent hand.

With that situation firmly in their minds, a showdown arrived pretty quickly during a round of No-Limit Hold’em. Timoshenko showed A♠ J♥ to be favourite against the Q♦ 7♥ of Clark. The board came 8♠ J♠ 6♦ 6♥ 4♥ to give Timoshenko two pair, jacks and sixes, and that was that for Clark.

However, two of the most well-populated matches for railbirds also came in round three, when Darcourt defeated fellow Frenchman Grospellier and Vegas-based Froehlich overcame Mexico-based Shaun Deeb – star of the recent PokerStars tournament Spring Championship of Online Poker (SCOOP).

Froehlich’s victory was swift and exciting for the onlookers, though, and arrived during a round of Pot-Limit Omaha. Deeb – who collected four titles at this year’s SCOOP – called 800 to see a Q♦ J♥ 8♥ flop before check-calling Froehlich’s 1,200 bet. Deeb again called a 2,500 bet after the K♥ arrived on the turn before check-calling all-in on the 3♠ river.

However, Froehlich placed Q♥ J♠ 7♥ 3♣ down on the table for a turned flush, prompting Deeb to muck his hand and end the match.

The 64 returning players will hold 72,000 chips, of which 24,000 will constitute their starting stack, leaving them two rebuy lammers each.