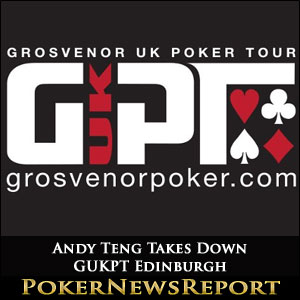 Andy Teng won his second GUKPT Edinburgh Main Event title after a colossal heads-up battle against Jonny Gray which went on until the early hours of the morning.

There was a sensational climax to the GUKPT Edinburgh Main Event this morning, as Andy Teng and Jonny Gray battled out the heads-up for more than three hours after what had already been a very long day at the G Casino in Maybury.

Yesterday´s final day started with 11 players still in with a chance of the title and £29,000 first prize – headed by WSOP bracelet winner Dominik Nitsche. However, Nitsche´s stack was nibbled away at by Yiangtao He and Andy Teng, and he was eliminated in ninth place when running his A♥ K♥ into Jeff Kimber´s A♦ A♣.

Throughout the final day of the GUKPT Edinburgh Main Event, the pace of play was pedestrian; but when there was action, it was usually on a grand scale and often resulted in a player being bust from the final table.

… and then Big Pairs

The demise of the next three players was attributable to failing to improve past dominating pairs. Ross Loggie was bust in sixth when his K♥ 9♥ missed its flush draw against Jonny Gray´s A♦ A♣, and Kevin Wood left the GUKPT Edinburgh final table in fifth when his 5♥ 5♠ was dominated by Andy Teng´s 8♦ 8♥.

Jeff Kimber (Q♥ Q♠) was desperately unlucky to be crippled by Jonny Gray (9♥ 9♠) when the 9♣ was dealt on the Turn, and he was sent to the rail a few hands later when his A♦ 7♦ could not find enough diamonds to improve past Andy Teng´s A♠ 10♠.

Brown Goes down Fighting and Gray Leads into Heads-Up

Scott Brown had started the day as the shortest stacked player with just 92,000 chips, but had found the cards when he needed to in order to stay alive in the GUKPT Edinburgh Main Event. Brown was crippled when he ran his A♠ 9♠ into Jonny Gray´s pocket Kings, but he chipped back up with Q♣ 8♥ against Gray´s A♥ 9♥ to be sitting behind a stack in excess of a million chips.

The heads-up conclusion to the GUKPT Edinburgh Main Event got underway just before midnight and for the first hour all the chips went in the direction of Andy Teng who established a 2:1 advantage. Jonny Gray doubled up into the chip lead when his 4♠ 4♦ made a set on the flop, but almost immediately the roles were reversed when Andy Teng doubled back in to the chip lead 10♠ 10♣ > Q♦ J♦.

Jonny Gray drew level once again when his 6♥ 5♥ paired on the flop to best Andy Teng´s K♦ 9♣, after which a deal was agreed that would see each player lock up £22,000 and leave £4,000 and the title to play for. Thereafter the conclusion to the GUKPT Edinburgh Main Event was wrapped up in thirty minutes – although it took one pivotal hand to decide the outcome of the title.

Andy Teng moved all-in with 5♦ 9♦, and was called by Jonny Gray, who had A♠ A♥. It looked as if the tournament was going to be all over until the board was dealt 2♣ 3♣ 4♣ / 6♥ / A♣ – Andy Teng turning a six-high straight to crack Jonny Grays set of Aces. Thereafter it took Andy Teng just ten minutes to wrap up the GUKPT Edinburgh Main Event – calling Jonny Gray´s shove with A♠ 9♠ with pocket Kings.

The Kings held, and Andy Teng added the title of GUKPT Edinburgh Champion to the GUKPT Thanet event he won in 2008.