The penultimate leg of the Grosvenor UK Poker Tour was taken in style last night by Andy Peters, to claim the GUKPT Blackpool title and £72,020 first prize. 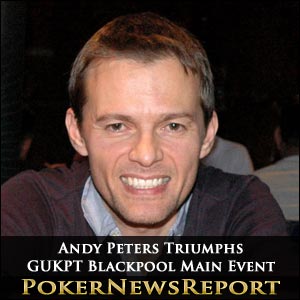 The penultimate leg of the Grosvenor UK Poker Tour was taken in style last night by Andy Peters, as he conquered a field of 262 to claim the GUKPT Blackpool title and £72,020 first prize – more than five times his live poker career winnings in just one hit.

His victory was made all the more remarkable by the fact that he was the shortest stacked player when the table was five-handed, four-handed, and three-handed – and then after the second hand of the heads-up.

After a very late finish on Saturday, ten players took their seats for the conclusion of the tournament. Ben Jackson, son of Paul, held a narrow lead over Mark Physick and Dan Corbett and, with blinds just about to increase to 8K/16K (ante 1.5K); only Jamie O´Connor was under pressure.

Physick Off to a Flyer

First blood went to Mark Physick, who flopped a pair of Aces against Dan Corbett´s pocket Tens, took an uncontested pot from Corbett and Jackson with a four-bet shove and then eliminated short-stacked Jamie O´Connor in tenth to race over one million chips. Dan Corbett temporarily recovered at the expense of Ben Jackson when flopping trip Fours to reduce the former chip leader to fewer than 300,000 chips, and chipped up again with A8 to eliminate Jack Ellwood (A6) in seventh. Andy Peters in the meantime had despatched Adrian Eley to the rail after his AQ caught a Queen on the flop to best Eley´s pocket Tens.

Dan Corbett was in the thick of the action as the blinds increased to 10K/20K (ante 2K), when his pocket Eights held to eliminate Mark Livesey (AJ). He then gave 100,000 chips to Mark Physick when he couldn´t top Physick´s pocket Threes before busting Paul Bracken in sixth when his pocket Deuces caught Bracken bluffing with air. Just after the dinner break, and as Ben Jackson (AQ) had taken his chip stack over the million mark at the expenses of Andy Peters (AJ – Andy now down to 500K), Dan Corbett was the next player to bust – shoving with J♥ 4♥ into Mark Physick´s A♥ 9♥. With nothing on the board to help either player, Corbett departed in sixth with Physick now up to 1.7 million chips with only four players remaining.

With a forty-five minute clock, the blinds were increasing rapidly and, just before the start of Level 24 (20K/40K – ante 4K) it was time to say goodbye to Rupinder Bedi. Bedi had become more active and was managing to steal a few blinds from the leading players, but the blinds were taking their toll on him as well as they came around more quickly. Eventually he was caught out by Andy Peters when he shoved with K♦ 8♣ into Andy´s (10♦ 10♠) big blind and was eliminated in fourth. Despite what was almost a double up for Andy Peters, he still remained in last position with 1.1 million chips against Ben Jackson (1.2 million chips) and Mark Physick (1.6 million chips).

The first sizeable pot during the protracted three-handed play was when Andy Peters slow-played pocket Aces to take a 450,000 chip pot. However, he gave it all back with interest when calling Ben Jackson´s 175K river bet against trip Eights – giving Jackson the chip lead and practically crippling himself in the process. Needing to do something, Andy went on a “shove-quest” – eventually getting paid off by both Jackson and Physick in uncontested pots. As Andy climbed his way back into second place, the shove or fold strategy was adopted by Mark Physick. Unfortunately for the long time chip leader, he picked exactly the wrong time to shove with A2, and was picked off by Andy Peter´s pocket Jacks.

Andy Peter´s took a narrow 2.1 million –v- 1.8 million chip lead into the heads Up against Ben Jackson, but the lead was soon reversed as Jackson hit trip Threes in the first hand of the two handed play. Peter´s clawed back, but was almost crippled betting into Jackson´s full house with his made flush. With the blinds up to 40K/80K, Andy Peter´s clawed his way back into contention again and, when his 400,000 raise with pocket Jacks was three-bet shoved by Ben Jackson´s `pocket Three´s and a third Jack was dealt on the flop, it was all over and Andy Peter´s was the GUKPT Blackpool Main Event Champion.

The final leg of the GUKPT tour takes place in London in just a week´s time, and if the final three players in Blackpool repeat their performances, they could be a force to be reckoned with. Ben Jackson, whose father Paul has grossed more than $1.3 million on the international circuit, also took down the £500.00 NL Hold´em Freezeout earlier in the week for a further £20,980 and looks a solid prospect for the future.