Day 2 of the $50,000 buy-in Poker Players Championship event #45 at the World Series of Poker in Las Vegas held more thrills and spills than the opening day. 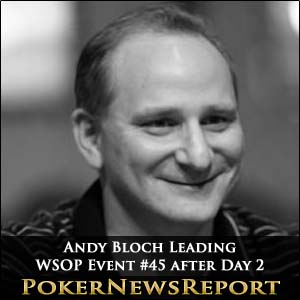 Day 2 of the $50,000 buy-in Poker Players Championship event #45 at the World Series of Poker in Las Vegas held more thrills and spills than the opening day.

More than eight hours of play saw the field cut back to 62 survivors for Day 3 of this five-day tournament, with Vegas-based one-time champion Andy Bloch leading the way at the Rio All-Suite Hotel & Casino on 687,000 chips in the chase to secure the David ‘Chip’ Reese Trophy in this eight-game format.

But Florida brothers Michael ‘The Grinder’ Mizrachi (fourth on 563,100) and Robert Mizrachi (sixth on 500,200) will also be back to challenge for the crown, while the former will be joined by one other bracelet winner in Vegas’ Brian Rast (20th on 303,900) following the elimination of David Bach.

Danish star Gus Hansen signed up for his first event of the series, but crashed out during a hand with eight-time bracelet winner Phil Ivey. Ivey had been short for much of Day 2, but recovered to end in 43rd with 166,200 chips.

One of the day’s largest pots arrived during the third level. Hollywood’s Jason Mercier came up against Pennsylvania’s Dan Shak, with the duo creating a massive pot of about 370,000 chips during a hand of Pot-Limit Omaha.

Under the gun, Shak limped in for 1,600 and Lyle Berman called from the hijack seat, as did Vladimir Shchmelev in the cut-off and button Allen Bari. Small blind Marco Johnson folded while big blind Mercier checked.

Mercier announced that he was all-in and Shak placed the remainder of his stack, at 74,000, into the pot as a call. Mercier revealed Q♣ Q♠ 9♠ 5♣ for top set, while Shak’s K♣ K♦ J♦ 10♥ gave him an overpair and an open-ended straight draw.

The 6♠ turn was no help to Shak, leaving him needing an ace, king or nine, although not spades as Mercier had also found a flush draw. Incredibly, the 9♣ river gave Shak his straight to stun Mercier.

Two-time bracelet winner Mercier had been chopped down to about his starting stack, but climbed back up to end Day 2 in 29th place on 253,200 chips, while Shak bagged up in ninth with 461,400.

Justin Bonomo was the first player to hit the rail on Day 2, while Lee Goldman also exited during the first level of play during a hand of 2-7 Triple Draw. John D’Agostino also left the event soon after as the second level started to trim down the field.