Andy Bloch finally bagged a WSOP bracelet at the weekend, with the veteran saying his victory was “sweeter” because the “final table was tough”. 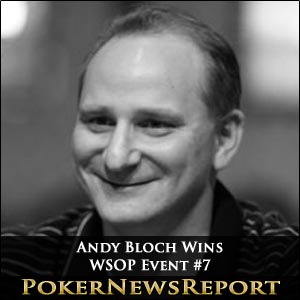 Andy Bloch finally bagged a WSOP bracelet at the weekend, with the veteran saying his victory was sweeter because the final table was tough.

The 43-year-old American was considered by many to be among the best players never to have triumphed in the famous series in Las Vegas. But all that changed with his victory, for $126,363, in the $1,500 buy-in Seven-Card Stud event #7 on Saturday night – just one day after his birthday.

Vegas-based Bloch – who had 27 cash finishes before this victory – fell just one place short of a WSOP victory twice before, but he was able to celebrate his birthday with a victory on the third and final day of this event at the Rio All-Suite Hotel & Casino, before declaring that he wasn’t too surprised that his first gold bracelet arrived in this variation of poker.

Champion is a Stud Star

Bloch – who had managed 10 previous final table finishes – added that, when he began playing poker Mashantucket’s Foxwoods Resort Casino in Connecticut, stud was king so he has played a lot of seven-card stud over the years.

So, after nearly 20 years of trying, Bloch finally outlasted a 367-player field – which created a $495,450 prize pool – to ultimately defeat three-time WSOP champion Barry Greenstein in a heads-up clash that left the runner-up with $78,038.

But Chicago’s Greenstein wasn’t the only big-name pro situated at the nine-handed final table, with 2006 champion David Williams (fourth for $36,470), of Vegas, and Houston’s Stephen Su (third for $50,332) making life tough for the eventual winner.

While admitting that it would have been easier to have completely unknowns who play badly at the final table, Bloch was delighted to have overcome such a tough trio of pros – so ensuring that people can’t say that he got lucky to go up against such bad players.

Moreover, the champion – who has a Harvard law degree as well as two electrical engineering degrees from the Massachusetts Institute of Technology (MIT) – reckons it is sweeter if the final table was tough, although he was willing to admit that, if I had to choose, I wouldn’t have wanted those three guys to be in the final four.

Indeed. It was an impressive line-up for the final four, with Williams crashing out to new chip leader Su, before Bloch then eliminated him in third place. Su was in front on fifth street with a pair of sevens, but Bloch snagged a second ten for the higher pair.

Bloch started the head-to-head with close to a 4 to 1 chip advantage and, although Greenstein lost a big pot quickly, he managed to eventually wrest the advantage away from his opponent.

But Greenstein’s lead didn’t last, with Bloch bouncing back into a 10 to 1 advantage, before the final hand saw the latter make queens and tens on fifth street as the veteran Poker Hall of Famer made eight-high straight to be in a great position to double-up. However, the Ac on sixth street and the Ks on seventh street handed Bloch a Broadway straight to confirm him as champion.

Day 2 had started out with 110 survivors, with the money bubble bursting when Englishman David Tighe exited in 41st place as the last player not to make the money. This ensured that Russia’s Viacheslav Zhukov was the first player paid when he picked up $2,685 for 40th.

Parisian Soulier – who won last summer’s $10,000 buy-in H.O.R.S.E. Championship – was the final table bubble boy when he crashed out in a hand with Greenstein.

The Frenchman was all-in on fourth street while holding (J♥ 8♦)/8♣ 9♦ for a split pair of eights, while the American showed (Q♠ 4♠)/Q♥ 6♣ for a split pair of queens and the lead. Soulier failed to improve so just missed out on the official final table.

If you want to learn more about 7 Card Stud Poker, you might check our page dedicated to this game here.