Andrey Vladimirovich Shubin was the only player to bag up more than 200,000 chips when play ended on the first day of the inaugural UKIPT Marbella Main Event. 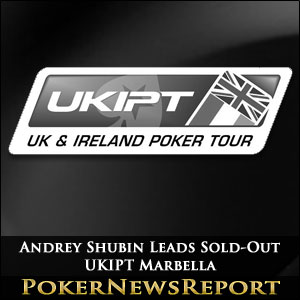 Andrey Vladimirovich Shubin was the only player to bag up more than 200,000 chips when play ended on the first day of the inaugural UKIPT Marbella Main Event.

Shubin – an online qualifier from Russia – overcame a French air traffic controllers strike and ten levels of play at the Andalucia Plaza Hotel in Puerto Banus to lead the PokerStars-sponsored UKIPT Marbella Main Event at the end of Day 1A ahead of fellow qualifiers Rob Wybrew from the UK and Poland´s Pawel Keller.

With the UKIPT joining forces with the Estrellas Poker Tour (ESPT) to bring a major live poker event to Marbella, a record number of players qualified for the event through online satellites on PokerStars.com and PokerStars.es; meaning that both Day 1s of the UKIPT Marbella are sold out as 700+ players chase a share of the €500,000 guaranteed prize pool.

The incredible turnout for the first flight of the UKIPT Marbella Main Event was in spite of the World Series of Poker taking place across the Pond and – possibly because all the glamour-pusses were indulging themselves in Vegas – featured very few sponsored PokerStars Pros.

Local hero Juan Manuel Pastor made a fleeting appearance at the tables until his pocket Jacks fell to a flopped set of Sixes, while Grzegorz “DaWarsaw” Mikielewicz is expected to take his seat at the Andalucia Plaza Hotel when the cards are in the air for Day 1B of the Marbella UKIPT later today.

… With Plenty of Anglo-Iberian Rivalry

The first day of UKIPT Marbella Main Event was possibly one of the noisiest Day 1As there has ever been, with a fierce rivalry developing between players from the UK and Spain. Cheers would ring out any time a player from either country was eliminated from the tournament – with the British definitely having the upper hand on Day 1A.

While the score in the top ten chip counts (below) may be Spain 2 England 2, there is plenty of UK talent bubbling under the top of the leaderboard including recent GukPT Stockton winner Neil Raine and UKIPT regular Alex Ferguson. The Spanish will be looking to make a comeback on Day 1B on the UKIPT Marbella Main Event, and the atmosphere is forecast to be electric!

The UKIPT/ESPT Marbella Festival has a number side events scheduled for the next few days. They include a selection of NLHE, PLO and bounty tournaments, the €2,000 buy-in High Roller and the €330 buy-in Marbella Cup.